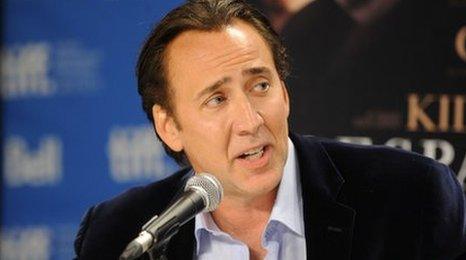 Nicolas Cage says he's "beginning to like the word 'actor' less and less", because in his work he's "interested in the truth".

That may explain why Cage stayed in character when on set filming Ghost Rider: Spirit of Vengeance, painting on a voodoo style mask.

It was an idea he had after discussing it with director Brian Taylor: "I said to him 'Well look, if I do this can I wear a mask?' Because I was concerned about feeling ridiculous on the set."

The 48-year-old went further, wearing black contact lenses and locating mystical objects to carry around with him.

"I would gather things together to wear in my wardrobe, like a bit of Egyptian artefacts from a pyramid," he said.

"And I would sew them in, or get some rocks together that had a frequency in the new age community."

But there was method in Cage's on set madness.

He continues: "Whether they work or not - or you believe it or not, if you're an actor and you give yourself over to it, it can stimulate your imagination and your psyche to believe you're the Ghost Rider."

Ghost Rider: Spirit of Vengeance is the first time Cage has played the menacing alter-ego of stunt rider Johnny Blaze, despite this being the second time he's starred in a Ghost Rider film.

"In the Mark Steven Johnson movie [Ghost Rider, 2007], I was not Ghost Rider, there was a stunt man doing that."

Cage sees the follow up "as its own entity," and took embodying the role seriously.

Dressed in his voodoo mask, Cage would walk on set and "wouldn't say a word to anybody".

"I saw the fear in the other actor's eyes and that only inspired me more to believe I was this spirit from another dimension."

The film features scenes where Cage gets to 'flip out', which is becoming a trademark of his acting style.

A 2010 YouTube montage of scenes, which shows Cage in various films, has been viewed nearly five million times.

When asked if those transformation scenes are what he enjoys doing most, Cage turns to art to get his point across.

"I have to find characters that allow me to realise, in the true sense of the word, my abstract dreams as a film maker."

"That means if I want to act the way I perceive a painting, like a van Gogh when things are a bit twisted, or a Francis Bacon, that means I have to find a character who is outside of our reference point or has a problem of some sort that enables me to act that way.

"Like Bad Lieutenant - he had a drug problem - I can act pretty outside the box. Or Johnny, he has a Ghost Rider problem."

Ghost Rider Spirit of Vengeance in 3D is in cinemas from 17 February 2012.