An advert claiming to be the first aimed directly at dogs has been screened on television.

It combines bells, whistles and barks with high frequency sounds that the majority of people can't hear.

Zara Boland, a vet speaking for Bakers dog food, told Newsbeat: "There is a chance younger people could hear it, but I couldn't say how young."

She insists it is safe and that it's simply to create fun and engage dogs with the television and their owners.

"It's about pitch and tone. It's not about increasing volume, which could potentially go too high. So there's nothing that could cause harm."

The dog food advert got its UK premiere on 13 February, during Emmerdale.

Newsbeat went to see 27-year-old Lisa O'Connor, from Hayes in Middlesex, and her two telly addict pooches, to test their reaction to the advert. 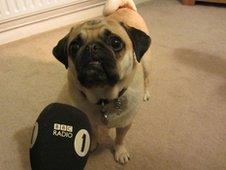 Image caption Mylo wasn't too interested in the advert

"Toby's a three-legged scruffy Jack Russell mix. He can get quite focussed on the screen sometimes."

The first 10 seconds threatened to be a complete let down, but then barking and mild snarling began to engulf the sitting room.

The usually quiet Toby is facing the screen on his back legs.

Lisa's verdict: "I am surprised at Toby. He doesn't usually react like this to the TV. Mylo doesn't seem quite as interested though.

"It definitely got my attention and would make me buy it. I could see this turning annoying though - you'd just end up muting the TV."

Vet Zara Boland says the sounds are between 18,000 and 20,000 kilohertz, and denies using dogs in an unfair way to publicise a product.

"I think it is a little harsh to suggest that," she says. "I'd be very surprised if there was any hyper excitement associated with it."