Madonna has spoken for the first time about M.I.A.'s middle finger gesture during the Super Bowl half-time show.

Speaking to US radio presenter Ryan Seacrest, she said she "wasn't happy" about it and that it wasn't planned.

"It's such a teenage, irrelevant thing to do... There was such a feeling of love and unity there. What was the point? It was just out of place."

Last week's gesture came when Madonna was joined by M.I.A for a rendition of new single Give Me All Your Luvin'.

American broadcaster NBC was forced to apologise after a record US TV audience of 114 million witnessed the moment.

"I was really surprised," Madonna told Seacrest. "I didn't know anything about it. I wasn't happy about it. 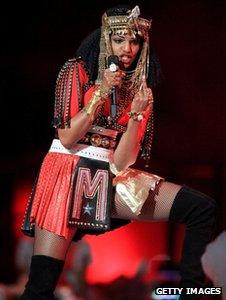 "I understand it's punk rock and everything, but to me there was such a feeling of love and good energy and positivity, it seemed negative.

The star added: "It's such a teenager, irrelevant thing to do... what was the point? It was just out of place."

Despite the comments, Madonna's spokeswomen Liz Rosenberg said the star had forgiven M.I.A., believing she just got caught up in the moment.

The 36-year-old Londoner, whose real name is Mathangi Arulpragasam, worked on Madonna's new song Give Me All Your Luvin with rapper Nicki Minaj.

The gesture is the first controversial incident during the Super Bowl's half-time show since Janet Jackson's "wardrobe malfunction" eight years ago.