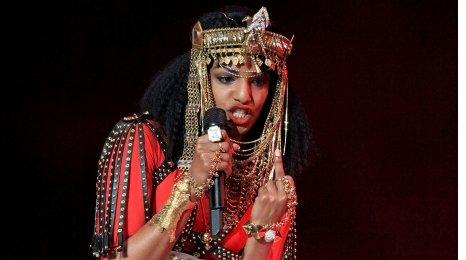 American broadcaster NBC has apologised after M.I.A. put her middle finger up during her Super Bowl half-time performance.

She made the gesture and swore during a performance of Madonna's new single, Give Me All Your Luvin'.

The Super Bowl is regularly viewed by more than 100 million people and is the biggest TV event of the year in the US.

"We apologize for the inappropriate gesture that aired during half-time," said spokesman Christopher McCloskey.

"It was a spontaneous gesture that our delay system caught late."

The screen was briefly blurred after M.I.A.'s gesture in a failed attempt to cut out the camera shot.

The NFL blamed a failure in NBC's delay system for allowing the gesture to be seen.

The broadcaster said M.I.A. did not do anything similar during rehearsals and the league had no reason to believe she would do anything during the show.

"The NFL hired the talent and produced the half-time show," said Christopher McCloskey. "Our system was late to obscure the inappropriate gesture and we apologize to our viewers.

"The obscene gesture in the performance was completely inappropriate, very disappointing and we apologize to our fans."

Video caption Madonna performs Give Me All Your Luvin with M.I.A. and Nicki Minaj. Footage courtesy of NBC

The gesture is the first controversial incident during the Super Bowl's half-time show since Janet Jackson's "wardrobe malfunction" eight years ago.

The brief exposure of the singer's breast in 2004 during a performance with Justin Timberlake got then broadcaster CBS in trouble with America's Federal Communications Commission.

Director Darren Aronofsky was investigated by the Federal Communications Commission in 2009 after was shown raising his middle finger at the Golden Globes.

M.I.A.'s video for Born Free, which featured graphic scenes of shootings and explosions, was given an 18-plus age restriction rating on YouTube in 2010.

The 36-year-old Londoner, whose real name is Mathangi Arulpragasam, worked on Madonna's new single Give Me All Your Luvin with rapper Nicki Minaj.

All three performed together on stage at this year's Super Bowl at the Lucas Oil Stadium in Indianapolis, in which the New York Giants beat the New England Patriots 21-17.

M.I.A. was nominated for an Oscar in 2008 for O... Saya, a song that appeared on the Slumdog Millionaire soundtrack.

She revealed on Zane Lowe's show that her fourth studio album, which doesn't have a name yet, should be released later this year.