Adele to make comeback at Grammys after throat surgery 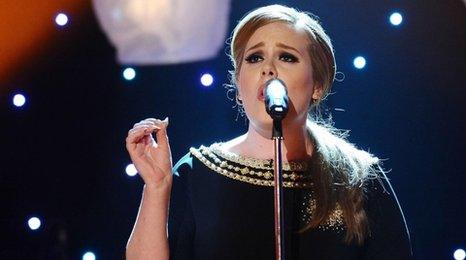 The London singer has not performed since she had an operation in the US to stop bleeding from a benign polyp.

The 23-year-old said she was "immensely proud" to be performing at the ceremony in Los Angeles on 12 February.

She is nominated in six categories at this year's Grammys, including record of the year for Rolling In The Deep.

In a statement she said: "It's an absolute honour to be included in such a night and for it to be my first performance in months is very exciting and of course nerve-racking but what a way to get back into it all."

In October it was announced that Adele was cancelling all gigs and public appearances in order for the condition to be resolved.

Adele smashed chart records in the US last year with her track Rolling In The Deep and second album 21.

Last week Adele equalled her latest US record by topping the Billboard 200 album chart for the 17th week.

She's been at number one for 19 different weeks and has now sold more than nine million copies of the record.

Rihanna is also going to play with Coldplay - they'll perform their collaboration Princess In China.