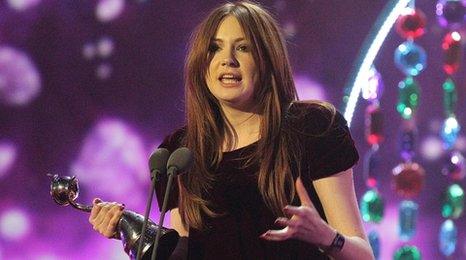 Karen Gillan says her exit from Doctor Who was a "mutual decision" between her and the show's producers.

The actress plays Amy Pond in the BBC One series but announced she was leaving the programme last month.

She said: "It was a mutual decision between me and Steven Moffat over a lovely dinner actually.

"We both opened up about where we were at with it and then came to the conclusion that this was the best time to go."

Gillan says she'll miss working on the series, but is looking forward to working on other projects in the future.

"I am so sad to be leaving Doctor Who, I've had the best years of my life on this job," she said.

"I've had the most fun. So that makes me sad to leave, and I've made my best friends on the show as well.

"But it's time to go on to other things and all stories come to their natural end so I'm excited."

The 24-year-old is set to begin work on a new movie after leaving the show.

"I'm going to do a film called Not Another Happy Ending about an eccentric writer," Gillan said.

"It's set in Scotland and that's going to be with another actor called Emun Elliott."

Elliott has previously appeared in the HBO TV series Game Of Thrones.