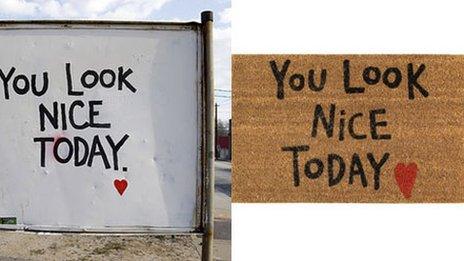 H&M is accused of copying an artist's design to use in its homeware range.

Tori LaConsay, painted a billboard in the US with the message You Look Nice Today to make residents in her town feel good about themselves.

A couple of days ago, she realised that H&M were selling towels, pillows and doormats with a similar design.

One message written in support of Tori LaConsay, from Georgia, Atlanta, said: "Your You Look Nice Today rug and pillow design has been stolen."

We have merely been inspired after seeing many different varieties of different text messages. We are truly sorry if we have led someone to believe that we intentionally copied someone else's creation
H&M initial reponse

H&M's initial response denied copying the artwork: "H&M apologises if anyone thinks we have copied, which has never been our intention and not allowed.

"We have merely been inspired after seeing many different varieties of different text messages, to create something similar in a different font, with the use of the big and small brackets and the placement of the heart.

"We are truly sorry if we have led someone to believe that we intentionally copied someone else's creation."

The 32-year-old artist painted the sign back in 2008, as a gift to people in her community. She hoped it would cheer them up as they went past it on their way to work.

After hundreds of complaints, H&M apologised for their Customer Services handling of the matter and posted a message earlier today to say "We're in direct contact with Tori LaConsay."