In many ways 24-year-old Becky Nicolson had a normal childhood.

As with many teenagers, when Becky was younger she worried about her looks, what people thought about her and whether she'd get a boyfriend.

But after being bullied at school and developing severe insecurities she took more drastic action than most.

She started having sex with strangers she met online to try to boost her confidence and persuade herself she was attractive.

Becky says over several years from the age of 15 to her early 20s she slept with about 40 men she met this way.

"I'd meet them in [her nearby] town and just go somewhere I knew no-one else would really know me.

If you want to look for anonymous, no strings sex it's a lot easier to do online than down your local pub
Professor Andy Phippen

"Depending on the time we'd either have a hotel room or if they had a car we'd drive and park up somewhere."

She says she didn't think about the risks at first but that changed as she got older.

"I became a lot more aware of the risks and how dangerous it can be," she admitted.

"It was addictive at one point, just to feel good about myself for two or three hours or days.

A report called The Use of Technology in Relationships was carried out by academics at the University of Plymouth in association with the UK Safer Internet Centre.

They asked people to respond to an online survey and 865 people aged 16-24 took part.

One in 10 of those questioned said they had met people online and then gone on to have casual sex with them. 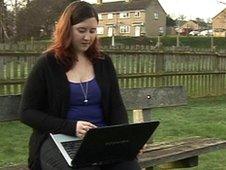 Some 50% admitted to having online sex over a webcam.

A third of those said it had been with a stranger.

Prof Andy Phippen carried out the research and says it shows a changing attitude in young people towards sex.

"The results of this survey show technology is now a normal part of relationships for tens of thousands of people," he said.

"That can encourage people to be more promiscuous.

"If you want to look for anonymous, no strings sex it's a lot easier to do online than down your local pub."

Clearly there are dangers for people who meet strangers for sex after finding them online.

In the most extreme examples there have been several cases of women being murdered.

But while the physical risks and dangers are there for all to see there is concern about any potential increase in sexually transmitted infections (STIs) because of this changing attitude.

"On the question of are they [social networking sites and apps] fuelling a rise in sexual infections, the answer is possibly yes.

"I don't think they are making you have unprotected sex but I certainly think the opportunity is there to take risks because they are meeting people.

"They are meeting them spontaneously and perhaps they are not thinking about their sexual health when they are having sex."