Call of Duty has banned hundreds of gamers from MW3 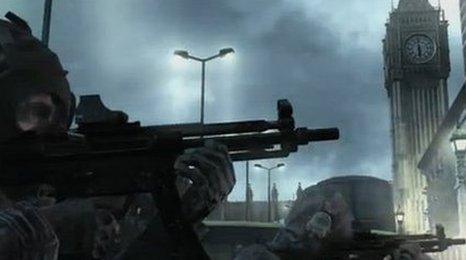 The developers behind Call of Duty: Modern Warfare 3 say they have banned more than 1,000 players from the online version.

"Any attempt to cheat, hack, or glitch in #MW3 will not be tolerated. 1600+ bans issued. Updates in works."

He then went on to answer questions from his followers about how to report gamers suspected of cheating.

"There's a button in game after a match," he said. "Click on them in the lobby and it gives option to View Gamercard + Report Player.

"Stats are always recorded, we can verify and detect cheating without video proof."

Any attempt to cheat, hack or glitch in MW3 will not be tolerated
Robert Bowling
Creative Strategist, Infinity Ward

Gamers who cheat their way to higher XP, or experience points, can often be vilified by the gaming community.

Genuine players can block them or, in this instance, follow Robert Bowling's advice and report them.

This is not the first time developers have been keen to take action against people cheating.

In August 2010 Rockstar Games issued a warning to people cheating in the multi-player, online version of its hit title Red Dead Redemption.

Managers gave cheats one week to delete any experience points they hadn't genuinely earned or they would be banned for life.

Speaking at the time Luke Pilgrim, 19 and from Dartford, said: "When I get XP I get a satisfaction from it because I've earned it.

"But if I was cheating I'd think that was unfair so hopefully people that do cheat, if they get banned from it, won't cheat any more."

Robert Bowling said in the case of Modern Warfare 3 different bans were available depending on how serious the cheating was.

"Every ban unique to the level of douchiness of the offense.