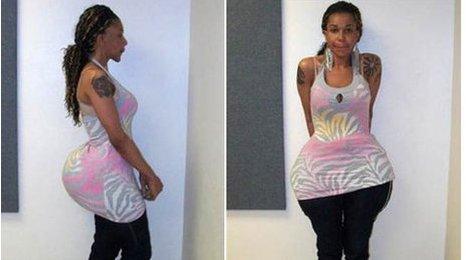 Police say they've made an arrest after a woman's buttocks were injected with a mixture of cement and tyre inflater.

Oneal Ron Morris, 30, was detained in Florida on Friday and charged with practising medicine without a licence and causing serious bodily injury.

Police photos suggest that Oneal Morris may have had a similar procedure done.

It's understood Oneal Morris was born a man but prefers to be referred to as a female.

Detectives describe her as transgender and claim she used a tube to inject a woman in several places on her buttocks.

The victim's body was filled with a mixture that included cement, mineral oil and flat tyre sealant and the incisions were apparently sealed with superglue.

Sergeant Bill Bamford, from Miami Gardens Police, said that when the pain had become too much Oneal Morris had told the woman: "Oh don't worry, you'll be fine.

"We just keep injecting you with the stuff and it all works itself out."

The procedure originally took place in May 2010 and investigators have been looking for the suspect for more than a year.

Police said the woman - who was referred to Oneal Morris by a friend - ended up at Tampa General Hospital with life-threatening symptoms, including pneumonia and a MRSA infection.

"That cocktail had serious complications and serious effects on this young lady," said Sergeant Bamford.

Police believe that other people may also have paid money to Oneal Morris but are too embarrassed to come forward.

The American Society of Plastic Surgeons has recently warned about the dangers of 'pumping parties', where people gather for cheap silicone injections in body parts like the buttocks, breast or chin.

It says that often those carrying out the procedures are not qualified and the conditions not sterile.

In a separate case, 22-year-old London student Claudia Aderotimi died in February after getting her buttocks injected with silicone in a Philadelphia hotel room.