Chief Ombudsman Lewis Shand Smith says that is because it is becoming more common for people to download big files, like videos, onto mobiles.

He says that has led to a rise in the number of customers being affected.

He says he makes the most of his mobile's unlimited data deal.

He said: "Mainly I use my mobile for Facebook to keep in touch with family and friends.

"I also send and receive a lot of work emails and watch the occasional video as well."

Like many people Adam thought he was on an unlimited data deal with his mobile operator.

As can often be the case though, there was a limit which was in the small print of the contract. 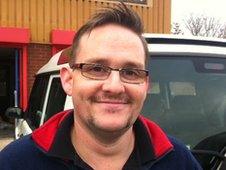 When he went over that limit Adam started getting charged extra.

Adam says that led to a bill of around £200 instead of his regular monthly one for £38.

"We're in a recession and I don't have the money to just throw at things like this," said Adam.

The unintended overspend led to him being cut off until he could pay his bill.

He says that meant missed emails and lost work.

"I'm the main point of call in my business," he said. "It's really difficult to not have something for a few days before they decided to reconnect me after I'd paid it."

As technology improves it is becoming more common for people to download bigger files.

Those include songs, videos and emails with large attachments.

Communications Ombudsman Lewis Shand Smith thinks phone companies could do more to warn people but says they are doing nothing wrong under the current regulations.

He said: "Most mobile operators are playing by the rules, so that then begs the question are the rules what they ought to be?"

He's calling on mobile phone operators to do three things.

"First of all, be very clear about what they mean by unlimited in the advertisements," he advised.

"Secondly, give advice to consumers so they know when they're reaching their limit.

"And thirdly, give advice on the amount of data that's being downloading."

In a series of statements the big five mobile phone operators said: "There are a variety of different tariffs and deals that let customers manage their bills effectively.

"Customer satisfaction is always a priority and there are several ways people can keep track of exactly how much data they use."

Depending on your download connection the amount of data you use for one song is roughly 3 megabytes, for a three-minute video it's 15 megabytes and for a half hour TV show it's around 350 megabytes.