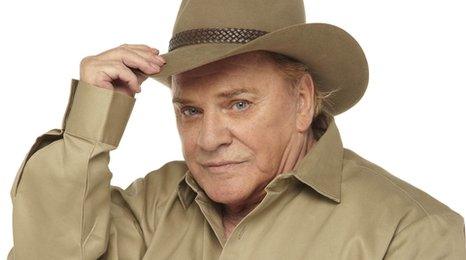 Freddie Starr won't be returning to I'm a Celebrity... Get Me Out of Here!, the show's producers have decided.

The 68-year-old comedian was taken to hospital hours after winning a "bushtucker trial" that included eating mouse tails and turkey testicles.

Starr has now left hospital and is said to have suffered a "severe allergic reaction from an unknown origin".

Producers said his challenge was one of the "stand out" moments from the history of the reality series.

I was sick not to finish the show. The decision's been made and I have to live with that. I wish everyone on the show all the best.
Freddie Starr

An ITV spokesman called Starr a "terrific contestant" but said that bosses had decided it was best for him to leave the reality show.

Viewers saw the comedian defeat Mark Wright, from The Only Way is Essex, on Monday night by consuming a variety of stomach-churning meals.

Starr managed to chew his way through a fermented egg, bugs and mice tails, a pig's anus, cooked camel toe and turkey testicles.

Two hours later he was taken out of the jungle for precautionary tests after feeling unwell.

Doctors were unable to pinpoint what caused the reaction but the show's producers have confirmed that Starr is now out of hospital and feeling better.

After being told the news he said: "I was sorry to hear the news about what the doctors said - that I was allergic to something, to play it safe and best for me not to go back in.

"ITV's got a duty of care and it's only right that the doctors advise them to keep me away from the jungle.

"It may not happen again but we'll never know.

"They couldn't find anything wrong with me physically.

"They checked me over and couldn't find anything wrong with me, but told the TV people it's a risk and that I could be allergic to something in there - and that duty of care ITV has, has to be respected.

"I was sick not to finish the show. The decision's been made and I have to live with that. I wish everyone on the show all the best.

"They're all really nice people and I had a great time in there."

The Liverpool-born comedian had already arrived late in Australia after a paperwork problem.

In 2010, Starr had bypass surgery after a heart attack - but that's not thought to be related to his allergic reaction in the jungle.

It's not yet known when he plans to fly back to the UK.