Why are under-25s hardest hit by unemployment? - BBC Newsbeat

Why are under-25s hardest hit by unemployment? 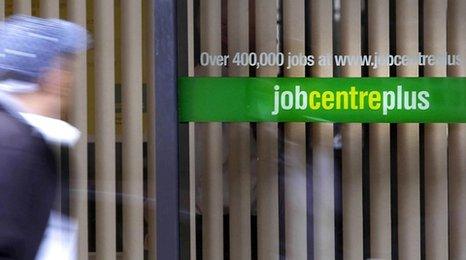 There's a worrying fact that often goes unnoticed when people talk about the current "record" rate of youth unemployment.

The number of 16 to 24-year-olds unable to get work has been rising almost without interruption since well before the recession.

In the summer of 2004 around one in eight young people in the UK was unemployed.

The rate rose almost every year, surged after 2008, and has now nearly doubled.

The latest figures from the Office for National Statistics (ONS) show the number of jobless young people broke the one million mark in the three months to September. The jobless total for 16 to 24-year-olds now stands at 1.02 million.

Take the BBC's Get Yourself Hired Test

Professor John Van Reenen, Director of the Centre for Economic Performance at the LSE, describes growing youth unemployment as "a long running problem, rather than something that has just happened".

Wednesday's statistics show youth unemployment has risen by 67,000 on the previous three months, the worst total since comparable records began in 1992.

That means that more than a fifth of young people are jobless, although the figure includes a significant number of full time students.

The figures also mean under-25s make up more than a third of all unemployment in the UK.

So why is it increasingly hard for five million young people of working age to find a job and is there anything new in all this?

In any economic downturn, unemployment tends to rise because firms lose revenue and need to cut costs.

Despite the fact that young workers tend to be cheaper to employers, often their productivity is lower and they produce less value for the company - meaning they can be more likely to be laid off.

Higher redundancy payments also mean it can be expensive for firms to lay off older workers.

So in a recession, the ratio of young unemployed people tends to rise against the number of older people out of work.

It's a phenomenon that occurred in the recessions of the 1980s and 1990s, according to Professor Van Reenen.

"I'm not sure there's anything particularly different about what's happening this time than there has been in the past," he says.

But one of the biggest alterations to the lives of young people in Britain has been the growth in the numbers going to university, a change Professor Van Reenen describes as "phenomenal".

Since 1997 the number of higher education students in the UK has risen from 1.8 million to 2.5 million, according to the Higher Education Statistics Agency. 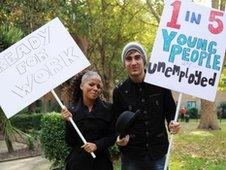 "That's a massive increase and of course more people coming out means in absolute terms there'll be more graduates who are unemployed," says Professor Van Reenen.

It's a situation felt acutely by Robert Simmons, 25, who graduated with a 2:1 honours degree in Music Production from the University of Central Lancashire (UCLAN) in 2008.

He spent much of the last three years unable to find any kind of work before finally getting a job with a human resources firm, for which he says he is overqualified.

Robert says there was huge competition for even the most basic jobs during his hunt for work.

"There could be 100 people applying, maybe 10 to 15 being interviewed for every position," he explains.

"Most of the jobs I ended up applying for were unskilled jobs, basically things that you could do after a week's training in-house."

But the bad news for graduates might be short-lived, according to Professor Van Reenen.

"Those people are generally getting new skills and that's going to, in the longer term, give them some protection in terms of their wages and their unemployment levels."

The bigger concern is over an apparently growing number of young people at risk of being locked out of the jobs market for good.

The issue of people who are not in education, employment or training (Neet) is "getting worse", says Professor Van Reenen.

The argument goes that the longer young people go without gaining professional skills, the harder it becomes for them to enter the labour force.

It's something that worries William Winch, 20, from Hackney in east London who has been searching for a job since he left college in the summer.

"I go out every day and if I see a job in the window I put my CV in there," he says.

"Everyone is trying to look for work really. So there's going to be a lot of competition."

William is now being helped by the charity Street League which helps get young people into work using football followed by professional training and support.

But economists point out that the depth of the recent recession hasn't led to the unemployment rates that many feared.

Professor Van Reenen argues that the labour market is working better than it has in previous recessions, with a lot more "pressure and effort" from employment services to get people into jobs.

There's also been a downward pressure on wages - many people have suffered a real terms drop in pay - due to what he calls a more "flexible labour market" helping prevent more widespread job losses.