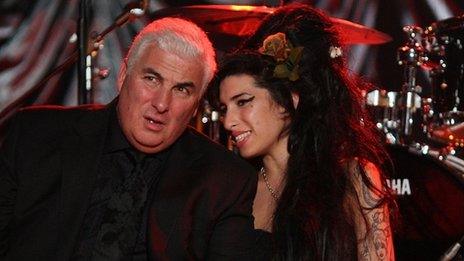 Mitch Winehouse is to publish a memoir about his daughter Amy, with the proceeds going to the charity set up in her name.

Mr Winehouse has said the book, My Daughter, will detail the "true story" about the singer.

He said: "I feel that I need to write this book to tell the true story of Amy and to help with my personal recovery."

Amy Winehouse, who publicly battled with drink and drug addiction, died in July.

Mr Winehouse has signed a deal with publisher HarperCollins who have described the book as a "heartfelt and revelatory memoir".

In a statement he said: "I also want to raise as much money as possible for Amy's foundation, so all proceeds from the book will go directly to help children who are disadvantaged through illness and substance addiction."

The book, due to come out in summer 2012, is said to bring "the many layers of her life together - the personal, the private and the public".

Mitch Winehouse officially launched the Amy Winehouse foundation last month on what would have been her 28th birthday.

Speaking to Newsbeat in August he said the charity would benefit young people with personal problems.