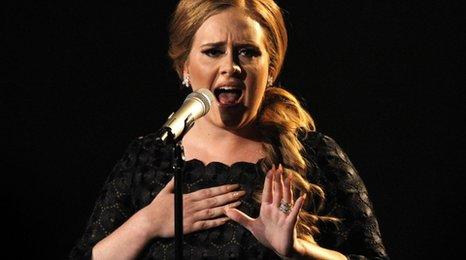 Adele has been forced to cancel her US tour after suffering more problems with her voice.

The singer was due to perform 10 dates, starting in New Jersey on Friday night.

The 23-year-old has been advised by doctors that she will need an extended period of rest after a haemorrhage on her vocal cord.

She said: "I'm heartbroken and worried to tell you that yet again I'm experiencing problems with my voice. I can't believe it."

Adele was forced to postpone a string of dates in the UK last month after suffering a severe cold and chest infection.

She also had problems with her vocal cords earlier this year after a bout of laryngitis.

In a blog on her website, the singer has apologised to her fans and explains why she is having problems with her voice.

"I follow all the advice I'm given and stick to regimes, rules and practices to the best of my ability but it seems to simply not be enough," she said.

I'm gonna be starting up vocal rehab as soon as, and start building my over all stamina in my voice, body and mind. I apologise from the bottom of my heart, sincerely I do
Adele

"The fact is I have never been able to fully recover from any of the problems that I've had and then continue to rest even once I'm recovered, because of my touring commitments.

"I've been offered the chance to not tour at all to save anything like this from happening again, but I simply hate letting you down."

The star also revealed that she was starting a period of rehab so she could start touring again.

"My voice is weak and I need to build it back up," she admitted.

"I'm gonna be starting up vocal rehab as soon as, and start building my over all stamina in my voice, body and mind.

"I will be back and I'm gonna smash the ball out the park once I'm touring again.

"I apologise from the bottom of my heart, sincerely I do."