More young people turn to food banks due to poverty

Thousands more young people are turning to food banks because they can't afford to feed themselves or their families.

The Trussell Trust which runs the UK's only national network of food banks says it is seeing more 16 to 30-year-olds through its doors.

Paddy Haines, 28, turned to a food bank for help when his hours as a chef were cut.

"We had to pay the rent, the gas and electric and after that there was none left for food," he says.

"We were so worried for the kids. We were wondering how we were going to put food on the table."

Charity workers say they're helping more young people because of high youth unemployment brought on by the economic crisis.

Director of The Trussell Trust Chris Mould says: "It is a real difficulty for young people to get jobs at the moment.

"Also benefits payments are extremely low which makes it difficult when travel and food prices go up."

Newsbeat contacted dozens of food banks across the UK.

Most of them said they had seen a big increase in the number of young people coming to them for food.

The majority said a third of their clients were between the ages of 16 and 30.

The Trussell Trust said the numbers of people using its food banks had increased from 41,000 last year to almost 61,500 in the past 12 months.

In some areas such as Exeter, Cardigan and the Isle of White, the number of young people was as high as 70 to 80%.

Paddy Haines, a father of two from Salisbury, told Newsbeat he had never had a handout in his life but said he had to "swallow his pride". 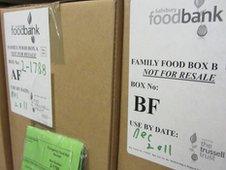 "If we didn't use the food bank, there was no way I could have fed my family for the week," he says.

Usually people are referred to the food bank charity by doctors, social workers or other bodies such as Citizens Advice Bureau.

A voucher is issued which can be exchanged for food for one or more people depending on their need.

The food bank provides enough food for up to three days and has a mixture of ingredients for three meals.

The food is tinned or dried, like pasta, so it won't go off before it's handed out.

Salisbury Food bank manager Mark Ward said most people they saw should have been with them several days before.

"People don't like to admit they need help," he says.

"They will try every possible avenue before they come to us.

"The first time they come to us they will be very hungry as they would have nothing in the house."

There are 78 operating food banks across the UK.

Nearly half of those have been opened in the past year due to demand.