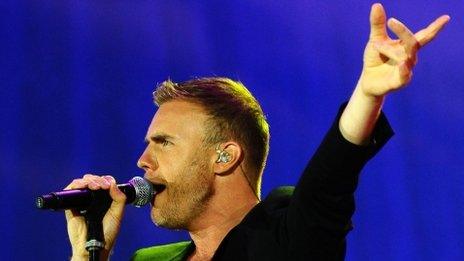 Take That's Gary Barlow, Lady Gaga and Coldplay are amongst the acts lined up to perform at the Children In Need Rocks gig in Manchester in November.

Taking place at the MEN arena on Thursday 17 November, proceeds from the 12,000 tickets will go to Children In Need.

The show will be broadcast live on BBC One, BBC One HD and BBC Radio 1.

The evening will be hosted by BBC Radio 1's Chris Moyles and Fearne Cotton, along with actor David Tennant.

Gary Barlow joined Chris Moyles on the Radio 1 breakfast show to make the announcement. He is organising the two-hour live concert and has personally contacted the acts due to perform.

"We've got some enormous acts - all on the same stage. It's going to be an incredible evening," Barlow told Newsbeat.

"I wrote a hit-list of the people I wanted.

Barlow has a long history with Children In Need.

Last year, he performed alongside his Take That bandmates during the live show.

In 2009, at the Children In Need Rocks gigs at London's Royal Albert Hall, he was reunited onstage with Robbie Williams for the first time in 15 years.

He's already helped to record the official Children In Need song for 2011.

To be released under the name The Collective, the track features UK talent including his fellow X Factor judge Tulisa Contostavlos, Wretch 32, Chipmunk, Ed Sheeran and Labrinth.

Labrinth said: "Gary wanted it to be more urban, which is why he came to me, and I've worked with most of the artists."