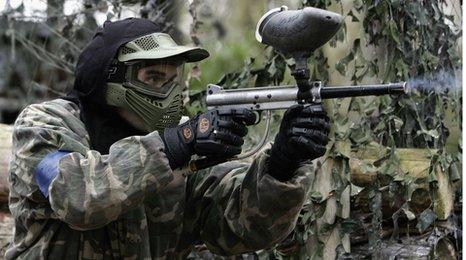 A woman has had one of her silicone gel breast implants ruptured after it was hit by a paintball shot.

The 26-year-old had been taking part in a game at an outdoor centre near Croydon on Saturday (20 August).

She went to her doctor's surgery on Monday, where it was discovered one of her implants had been torn apart.

"We respectfully ask that any ladies with surgical breast implants notify our team at the time of booking," says a statement on UK Paintball's website.

"You will be given special information on the dangers of paintballing with enhanced boobs and asked to sign a disclaimer.

"You will also be issued with extra padding to protect your implants while paintballing."

The woman involved hasn't been named.

An extra line has also been added to the company's standard indemnity form saying, "paintballs can damage/rupture breast implants". 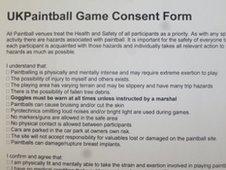 Paintball capsules travel at around 190mph (305kph) although they do slow down before impact.

They generally contain food colouring or gelatine and can leave paintballers with bruising if fired at close range.

A spokesman for UK Paintball said they were now taking precautions to make sure women with breast implants avoided injury, but said he thought it was the first accident of its kind in the UK.

He said: "Part of the fun of paintball is that it hurts a bit when you get shot but in all the years we've been going we've never seen an incident like this.

"It came as a real surprise to hear that a woman had her implant burst at one of our centres and whilst she's going to make a full recovery, we want to ensure nothing like this happens ever again."