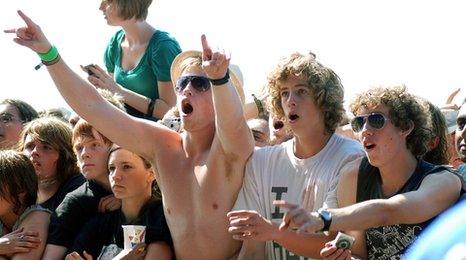 One of the UK's biggest festival bosses has reassured music fans that he has "emergency plans" in place to cope with severe weather at his events.

It's after five people were killed and more than 100 people were injured after a storm struck Pukkelpop festival in Belgium last week.

Melvin Benn said that he was "devastated" about those events.

He added that it was "really difficult to deal with" for affected families and organisers.

Melvin Benn was speaking to Newsbeat at the Leeds festival where 80,000 music fans have begun arriving for three days of live music.

He also organises the Reading leg of the event along with summer music events like The Big Chill and Latitude.

The UK has an exemplary record in terms of safety at festivals. The festivals are all governed by very strict licensing. There has to be sign off of everything
Melvin Benn

"If we had something similar [to Pukkelpop] I know what actions I would take in order to make sure people were safe," he said.

"I have to table top exercises with the emergency services about the actions I would take in the event of all of those things.

"Believe me, there is no scenario of an eventuality that I have not looked at, including freak storms. I know how I would deal with it to ensure peoples' safety.

"The level of effort over safety is immense. It's the thing which keeps me awake at night."

Staging collapsed, giant screens fell down, tents were flattened and trees were uprooted, all in the space of minutes when the storm struck Pukkelpop last week.

The festival, which was to feature performances by Foo Fighters and Eminem, was subsequently cancelled.

"It's virtually impossible to deal with things that are of that intensity without warning.

"Here in the UK, I would like to think, and certainly history has always suggested, that we've always had warning and that we're able to prepare.

"The UK has an exemplary record in terms of safety at festivals. The festivals are all governed by very strict licensing. There has to be sign off of everything."

The headliners at this year's Reading and Leeds festivals are Muse, My Chemical Romance and The Strokes.