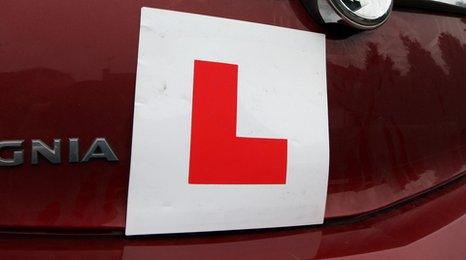 The government says it will review the system used to train driving instructors in the UK.

That's after warnings from driving groups that learners are more likely to fail their test if taught by trainees.

Some trainees hold "pink" licences, which mean they can teach under no supervision and charge normal fees.

The Driving Instructors Association (DIA) said the trainees are "not properly supervised" but others believe the pink licence system is necessary.

In a statement the RED driving school, one of the UK's biggest driving centres, said it was important that trainee drivers were licensed.

What are pink licences?

"The trainee licence scheme brings regulation into an unregulated industry," it said.

"If this is removed without a replacement scheme, or without new regulation requiring the trainee to receive expert training, it will be road safety which is put at risk."

Steve Garrod of the DIA said the system was widely abused and should be scrapped.

"The pink licence system has been neglected for many years and people on it are not properly supervised.

"It's not right that trainees can charge the same amount as fully qualified instructors when they are less experienced.

"The chances of you passing your test with a trainee are lower and you could end up spending far more money," he added.

There are also concerns that learners getting lessons could pay full price but end up with a trainee, not a fully qualified instructor.

Barry Kenward from DIDU, a national driving instructor's group, said the general public might not know what to look for.

"It is a requirement to display your pink or green licence in a prominent place in the window so it can be seen by the pupil," he said.

"We have seen many which aren't clearly visible and in some cases have heard some trainees are deliberately deceptive so they can keep earning top rate money."

Simon Richards, who is a driving instructor in Kent, used to have a pink licence.

"If I needed advice from someone I could always ring up and get that advice but there was no actual supervision or follow-up calls or anything like that," he said.

"The quality of instruction isn't so good, they may not be in full control of the pupil like a fully qualified instructor would be and some charge the same price for a lesser job."

She said: "Someone on a pink licence can actually fail the last part of their assessment to become a fully qualified instructor and on the same day go out and teach learners by themselves."

"The trainee licence system has been set up to allow trainee driver instructors to gain some practice as they are preparing for the final part of their examination process," he said.

"They are encouraged to work very closely with a supervising instructor.

"We recognise that we will need to develop some proposals to improve the system.

"However, there have been significant improvements in the quality of the training provided by the driving industry."