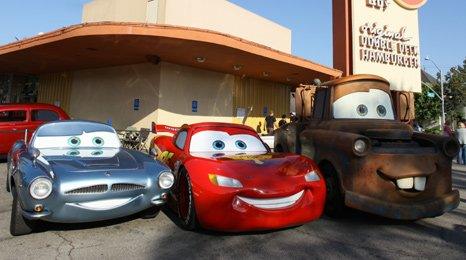 The boss of Pixar animation has told Newsbeat that merchandise from the first Cars film sold $10bn worth worldwide.

John Lasseter claimed that the sales figures made Cars merchandise "the biggest seller in history".

"It's pretty staggering. It's not why we make the movie but it is pretty exciting that around the world Cars merchandise sold over $10bn dollars worth."

The Pixar boss described the sequel as "a spy movie".

"It's not a parody of a spy movie. It is a spy movie but with cars as characters," he said.

"And what's fun about the spy genre is the spy cars with gadgets are the same thing as a spy, it's one and the same.

He said that he didn't think the merchandise could sell if the story didn't appeal to children.

"When you see a child out there in the world having a toy of our character it means that they really, really love that character.

"It always starts from making a great story," he said.