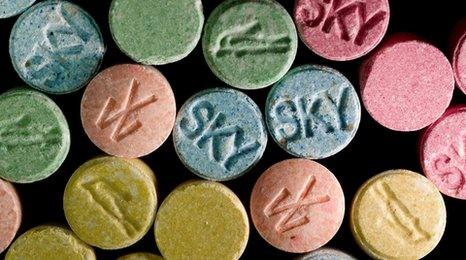 Ecstasy users are being warned about a rise in the number of higher strength pills available at clubs and festivals.

In recent years almost all of the pills sold by dealers as ecstasy have really been made from amphetamines, caffeine and other stimulants.

But most of the tablets seized at festivals this year contained MDMA, the stronger chemical first used to make the drug in the late 1980s.

Drug charities say they are seeing a similar trend in other parts of the UK.

"This can cause real problems for people who are used to taking half a dozen tablets on a night out," said Harry Shapiro at DrugScope.

"The main danger when you take ecstasy is ending up in A&E with heatstroke and that danger increases with the amount of MDMA in the pill."

Ecstasy users who drink too much water on a night out are also vulnerable to a condition called hyponatremia or water intoxication.

As a result, the level of salt in the body is diluted to a dangerous level which can, in rare cases, prove fatal.

1.5% of 16 to 59-year-olds who fill out the annual British crime survey say they take ecstasy at least once a year.

Multiplied across the population it suggests at least 540,000 people use the drug, making it the third most popular illegal substance after cannabis and cocaine.

One twenty-four-year old, who didn't want to be named, said he takes it once a month when he goes clubbing.

"About a year ago there was a change in the type of pills out there," he said.

"All of a sudden we started getting ones which I'm told are like the rave scene in the early 90s.

"They are noticeably stronger, so whereas before you would be taking three or four a night, now you can have one and get the same effect."

Figures from this year's Glastonbury Festival appear to back this up.

Most of the tablets recovered in 25 separate seizures contained MDMA, according to early police figures seen by DrugScope.

In 2009 just one in 12 pills tested positive for the same chemical.

Newsbeat understands that drug testers at this year's T in the Park festival in Kinross, Scotland, reported similar results.

The Forensic Science Service, which tests drugs for the police, has also seen the same general trend over the last 12 months.

Forensic drug experts say it's very difficult to pin down why the make-up of pills changes in this way.

Some think it reflects an increase in the availability of the base chemicals used to make the drug.

Because the purity of ecstasy has been in decline in recent years, people are taking several pills at once and won't have experienced it at these new, higher dose levels
Harry Shapiro
DrugScope

Others think the growth of new compounds like mephedrone has forced dealers to offer a stronger alternative.

One former ecstasy dealer told Newsbeat there is now a 'dual market' for the drug with weaker pills selling for around £3 and higher strength MDMA pills trading for between £10 and £15.

The findings come after police warned that ecstasy tablets six times stronger than normal were being sold in the west of Scotland.

The deaths of two men in Ayrshire have been linked to the pills although final tests are not yet complete and detectives will only say that investigations are ongoing.

Drug charities say they have seen other reports of users caught out by the change.

In early July Edinburgh-based Crew 2000 issued a warning to users about the new wave of higher strength pills.

"We have seen people dropping a number of pills and ending up freaking out," said the charity's director John Arthur.

"For some people it's their first real ecstasy. As they have been used to pills made from legal highs and caffeine, they are not used to the real thing."