Adele given all-clear to sing after vocal cord problem 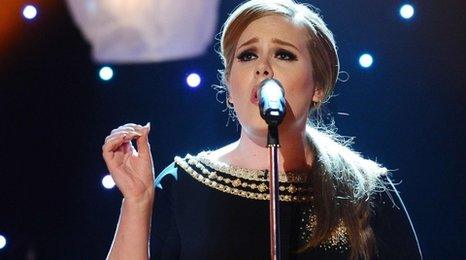 Adele says she's been given the all-clear after recent problems with her vocal cords.

She told Radio 1 DJ Chris Moyles she'd been recovering in the UK for the past month after suffering laryngitis.

"It's basically a hole in your vocal cord but I sang through it so that's why it popped. I'm better now it's fine, I got the all-clear," she said.

The 21 singer has a full set list planned for her iTunes Festival performance on Thursday (7 July).

She returned to the stage for a London gig at gay Pride at the weekend.

Adele said she was planning on staying in the UK for another two weeks before finishing the other half of her American tour in August, which she had to cancel due to her illness.

She's returning to the UK to tour in September.

The London singer also hinted that fans would potentially hear more from her next year, but wouldn't say more than that, adding: "There's a possibility I'm doing something quite big next year but I've got a meeting about it on Friday."

Adele has enjoyed huge success in America this year selling more than two million copies of her second album 21.

It means she can now afford to pay for her friends to see her when she's performing abroad.

She explained: "I flew my friends out to New York and I made them come to all the shows. I think they were a bit bored by the end.

"I get to share it with my friends, which is really nice and I never got to do that before.

"I don't like talking about it when I come home, because all I ever do is talk about what I do. So I like to just be normal with my mates."

As for her career highlights so far, the singer said that all of her shows were highlights but that the Brit Awards were particularly memorable.

She said: "I was so frightened. I've never actually been so scared in my life but it ended up being the most life changing night of my life.

"Everyone stood up. I've never been given a standing ovation by my peers and by the industry. It was amazing.

"I was really embarrassed when I was singing that song because I hate getting emotional about my ex-boyfriend.

"That's why I broke down. I saw my manager and he looked proud and I love making him proud."