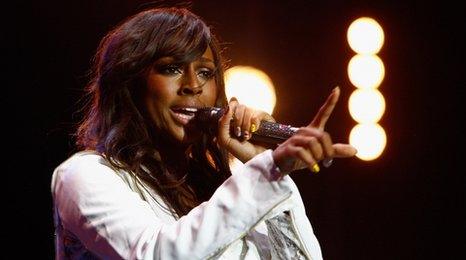 Alexandra Burke has revealed that she is in talks to play the lead role in the London stage production of The Bodyguard.

The 2008 X Factor winner says she can't say much about the plans because she is working on her record.

"There has been talk about that," she admitted. "But at the moment I am concentrating on my second album."

The singer confirmed no decisions had been made about whether she would play the role of Rachel Marron next year.

The role was originally played in the 1992 movie by Whitney Houston and also starred Kevin Costner.

"It came about from my management," Alexandra Burke revealed. "They spoke to me about it but I can't say too much."

Alexandra Burke is hoping to release her untitled second album towards the end of the year.

The singer, speaking at this weekend's Isle of Wight festival, said: "There's no specific date as yet because it's not finished.

"I don't want to give a date out, and it's not a secure date, as that will upset fans.

"I will just say towards the end of the year and make sure it's perfect for you guys."