David Cameron 'does not want' gay kissing ban on TV 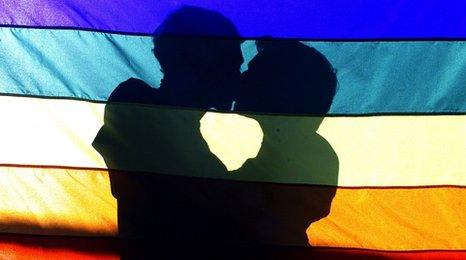 David Cameron has indicated he will not support any calls to ban gay kissing on TV before 9pm.

It follows newspaper claims that the prime minister didn't want images of same sex kissing shown before the watershed.

Last year the government asked the chief executive of the Mothers' Union, Reg Bailey, to carry out a review into the way children were 'sexualised' by things like TV shows, music videos, clothing and adverts.

The review is due to be published later this month.

Some newspaper reports claimed it could call for a ban on same sex kissing on TV in the early evening, leading to criticism from soap stars.

Coronation street actor Anthony Cotton, who plays gay father Sean Tully, said David Cameron was "not in touch with people" after reports he would support the review's recommendations.

But a spokesman for the prime minister has told Newsbeat: "Those suggesting that the PM is looking at a ban are both wrong and being irresponsible."

He said the review's remit "doesn't include making recommendations as to what should or shouldn't be shown on TV".

However the Department for Education's website says Reg Bailey's review will be looking into how parents can tell broadcasters about the "things they are unhappy about".

Earlier this month, Mr Bailey tweeted: "Don't believe everything you read in the press. Brookside kiss has never been mentioned in anything the review has looked at."

All four major soaps - Coronation Street, EastEnders, Emmerdale and Hollyoaks - have gay or lesbian characters and all have had gay couples.

Some film-makers argue that the 9pm threshold no longer matters with children able to watch adult content on their mobiles and online.

David Cameron's spokesman said the government is taking forward a "range of LGB&T (lesbian, gay, bisexual and transgender) policies to build on the work done by the previous government".