By Dave HowardNewsbeat US reporter 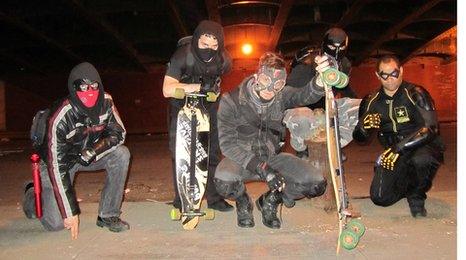 A group of crime fighters in New York who dress as superheroes say they patrol the streets of the city "to make life better for everyone".

"If you turn yourself into a nameless symbol, you can stand for so much more than just one person out there."

The man speaking looks a bit like Batman too, in combat gear and a black leather face mask.

"I'm just a guy in a suit," he says. "But I'm trying to do what we should all do, which is make life better for everyone."

He calls himself Samaritan Prime - they keep their real names and identities secret.

He is part of a group called The New York Initiative and one of hundreds of people around the world who call themselves "real life superheroes".

Crime fighting Hollywood film Kick-Ass is based on them.

The growing movement started in the United States but it now includes people in places like Birmingham and Norwich in the UK.

Tonight, NYI members are patrolling the notorious South Bronx projects, looking for troublemakers and their victims.

I don't do this to punish the wicked but to protect their victims. But some people just don't take kindly to being politely asked to stop what they're doing
Deaths Head Moth

Zero and Short Cut are on skateboards, Samaritan rides a bike.

Battlestar, Nitro and Deaths Head Moth are all on foot.

"We find drunks fighting out, domestic abuse, a robbery, anything like that," says Deaths Head Moth.

"I stopped a rape once. A couple of guys were taking a drunk girl home with them.

"They were talking about all the stuff they were going to do to her. I came up and I told them to get away from her."

As we walk, Samaritan plays a mouth organ.

"It's more of a weapon than an instrument," he explains and shows how the sharp metal corners can be jabbed into someone's face. 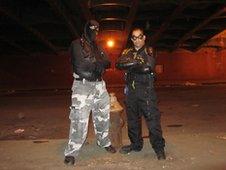 Pointing at Nitro, he says: "My friend here was at the class where I taught unconventional weapons. He can tell you from experience what it's like to be on the wrong side of a harmonica."

Nitro shakes his head: "I do not want to deal with that harmonica ever again."

It's one of a number of items carried by the team that are legal, but can still do damage in a fight.

Some wear studded gloves. One has a long metal torch that can be used as a club.

"I don't do this to punish the wicked but to protect their victims," he says.

"But some people just don't take kindly to being politely asked to stop what they're doing."

We're doing something. It's better than sitting on our asses and complaining about it
Zero

The authorities say crime fighting should be left to the police, although the New York Police Department refused to comment on the group's activities.

Zero is scornful. "Check the stats," he says. "They don't show up."

A serial killer has been targeting prostitutes in New York. The team's offering protection to women who think they're at risk.

"We're doing what we can," says Zero. "If we had something else to offer, we would offer that."

Around us in the South Bronx is evidence of drug dealing. 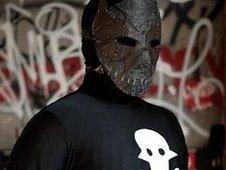 "Little crack baggies," explains Deaths Head Moth. "They're about the size of a postage stamp."

It's a quiet patrol though, and the team think their presence has stopped deals from going ahead.

"They'll see us and take off running," says Samaritan. "They go to the dark corners that all insects retreat to."

"We're doing something," adds Zero. "It's better than sitting on our asses and complaining about it."

Does he think their costumes might look a bit silly though?

"I really don't. What we wear is gear. If it's a little extra designed, it's crazy cool, you know? I get a lot of compliments on it."