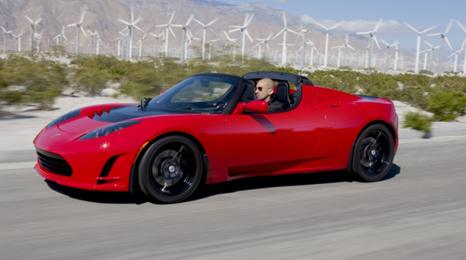 The BBC is being sued by the makers of the electric sports car, the Tesla Roadster, over claims a race on Top Gear was rigged.

Tesla Motors claims the test set up by Jeremy Clarkson on a 2008 edition of the show was rigged to make it look like the Tesla ran out of power when racing a petrol powered Lotus.

The Tesla Roadster is the world's fastest production electric car.

A Top Gear spokesman said the BBC would be "vigorously defending" the claim.

On the programme Jeremy Clarkson claimed: "Although Tesla say it'll do 200 miles, we worked out that on our track it would run out after just 55 miles."

But in a statement on its website, Tesla said the Roadster's miles per charge had been certified at 211 miles by a third party European Union (EU) test.

It argued that because the car was "driven aggressively" on Top Gear the charge didn't last as long, but that if driven "mindfully" charges could last for 313 miles.

The statement also disagreed with several other elements of the show.

A Top Gear spokeswoman said: "We can confirm that we have received notification that Tesla have issued proceedings against the BBC.

"The BBC stands by the programme and will be vigorously defending this claim."