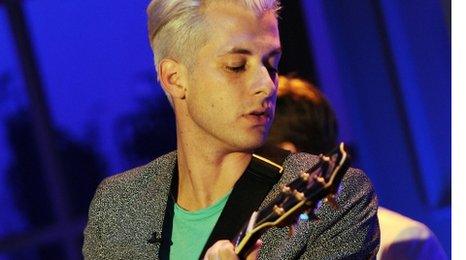 The 35-year-old DJ, guitarist and producer will appear at the festival on Saturday 30 July.

House of Pain, Katy B, Clare Maguire and Eliza Doolittle will also be performing.

The theme at this year's Camp Bestival has been announced as medieval and there'll be food from local celebrity chef Hugh Fearnley-Whittingstall.

Curator and Radio 1 DJ Rob da Bank said: "This year's Camp Bestival is going to be the best ever.

"We've geared up Lulworth Castle to be a total festi-holiday experience, bringing back the spirit of the Great British Camping holiday with bells on.

"All this plus headline performances from Blondie and Mark Ronson, the return of the legend that is Mr Tumble - and even Sooty, Sweep and Soo are back to bring a bit of nostalgia to the weekend.

"We can't wait here at Camp Besti HQ, so get your medieval costume in the bag and we'll see you at the end of July to kick of the school summer holidays in style! Hi De Hi."

For the first time this year, the campsites will be opening from 12pm on Thursday 28 July.