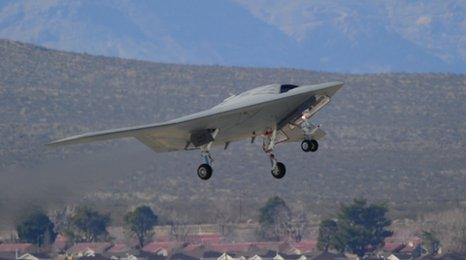 The X-47B jet is being designed by weapons manufacturer Northrop Grumman for the US Navy.

It was in the air for 29 minutes during its maiden flight and reached an altitude of 5,000 feet.

Officials say it will help form part of a new generation of unmanned drones and works like a smaller version of the B-2 Stealth Bomber.

As such it would be very different from the current fleet of remote controlled military planes like the Predator and Reaper.

Instead the X-47B would be virtually invisible to radar and fly at much faster speeds than those older, propeller driven machines.

In a statement Captain Jaime Engdahl, a programme manager for the warplane, said: "Today we got a glimpse towards the future as the Navy's first-ever tailless, jet-powered unmanned aircraft took to the skies."

The flight was primarily designed to test the jet's guidance and navigation systems and the aerodynamic control of the tailless design.

It was controlled from the ground by a joint team of the company's engineers and Navy specialists. 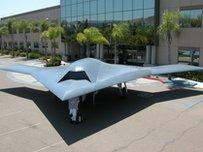 Northrop is building the bomber as part of a £395 million contract signed in 2007.

"Designing a tailless, fighter-sized unmanned aircraft from a clean sheet is no small feat.

"Commitment, collaboration and uncompromising technical excellence among the Navy [and] Northrop Grumman made today's flight a reality.

"We are indeed honoured to have given wings to the Navy's vision for exploring unmanned carrier aviation."

Although it will be several years before the X-47B is ready for operations officials say it should have its first test flight from an aircraft carrier in 2013.