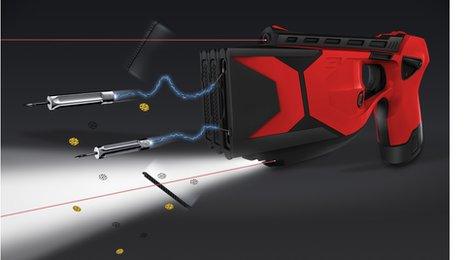 The company that makes Tasers has unveiled a version of the device designed for use on large animals.

It can temporarily incapacitate mammals like bears and moose and is designed to increase the safety of wildlife workers and park rangers.

Taser says the new device will save lives by reducing the need to use guns to kill or tranquilize.

The laser-sighted weapon is based on the company's most advanced police Taser, the X3, but is optimised to work on large animals with thick hides.

Like other Tasers, it delivers an electric shock by shooting two electrode darts attached to conductive wires.

The subject's motor nerves are immediately affected and the brain is unable to send signals to the muscles until the charge is turned off.

Tests in Alaska, and an incident in Oregon involving a trapped elk, suggest that the device is effective in subduing large animals.

Police use of Tasers on humans has attracted controversy, with critics claiming they are responsible for more than 200 deaths.

The United Nations also classes them as a "form of torture" because of the "acute pain" they can cause.

Supporters argue that in the right circumstances they can protect the police and public and guard against more drastic measures.

Taser possession is illegal in the UK, but some police forces allow specially-trained officers to use them in certain high-risk situations.