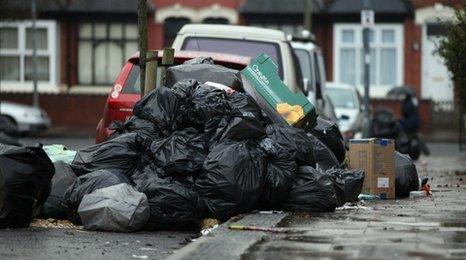 For some people in parts of England, a lack of council waste collections is ruining the start of their New Year.

Those worst affected, in places like Exeter, North London, Somerset and Gloucestershire, haven't had their bins collected since early December.

People in Birmingham are suffering a double blow after binmen announced two days of strike action in a row over pay.

The government's told council leaders across England to clear the backlog of rubbish that's built up over the holidays.

Some people have already decided things are so bad, they're paying for extra collections by private firms.

Dylan Gosiewski owns a waste collection company called ClearQuick in Bristol and says they're getting more call-outs than normal. 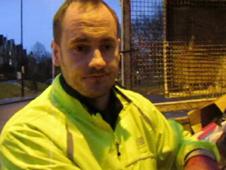 "Getting your rubbish collected is seen as a necessity, not a luxury any more," he said.

"People would rather pay extra to get rid of the smell, health risk and things like rat infestation."

His company's been up and running for four years and he has three vans on the roads five days a week.

"We're getting around a third more calls than normal," he said. "That's partly because of the pre-Christmas bad weather and the festive season.

"Most of our customers are those with a disposable income but we're seeing a growing number of people who aren't well off, ringing us for help."

Dylan charges £25 for a visit and gets rid of general black bag waste, recycling and bigger items like sofas.

Mum of three Liz is one of his customers.

She said: "My children are all under the age of four, so I don't want old nappies stocking up in the bin, in the garden they play in.

"It's an extra cost I don't want to pay for, but I feel I have no choice and would rather it's dealt with."