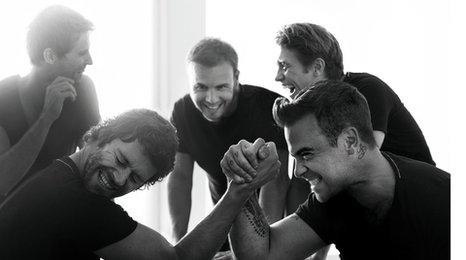 Take That have revealed that they thought about changing their name for their comeback with Robbie Williams.

The reformed five-piece toyed with rechristening themselves for a one-off single but eventually decided against it.

However, the idea freed the band up to explore a fresh sound, according to Robbie Williams.

He's told Q magazine it was the trigger for the electro-pop sound on new album Progress.

"I'm guessing that the initial idea of not being called Take That freed Gary up," said the 36-year-old.

"After those last two records the thought of the four of us just going in and doing another... it solved all that Rob coming back. It's made it interesting," he said.

Robbie Williams originally left the band in 1995 but started work on new material after clearing the air with Gary Barlow last year.

Jason Orange says that Williams' departure could have been caused by "bullying" by the other members.

"He was the kid in the band and maybe I bullied him in some ways, not overtly but covertly. He took exception and rightly so.

"We had a lot of tensions going on and it's easy in a group for one person to become the scapegoat," admitted Orange.

"I think we did that to a large extent with Rob."

Robbie Williams also says that despite his solo success he longed to be back in a group.

"It must've been this one but I had to wait for the stars to realign. It was like, 'I've done Come Undone and Feel and Angels - and that's not what I want either'."

"I was gutted about it [having to promote Video Killed the Radio Star]. And, unfortunately for EMI, I was disinterested. This was more exciting and happier."

Take That's new album Progress is due for release on 22 November.