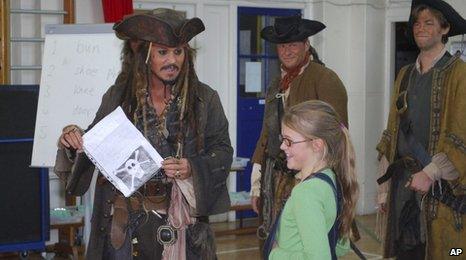 She had written to the Pirates of the Caribbean star, who was filming nearby in Greenwich in south-east London.

Her letter had requested his help in staging a mutiny at her school. She explained: "I sent it because I love Pirates of the Caribbean, it's one of my favourite films ever.

"When I wrote it I had no idea he was actually going to come."

The nine-year-old was in a school assembly at Meridian Primary School when Johnny Depp turned up in his full movie costume.

Depp then picked her out from the crowd: "He took out my letter and said he was going to frame it and then he asked where I was. 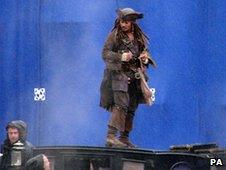 Depp chatted to the children in character for quite a while: "He said he brought all these pirates will him so we could have a mutiny and take us to the staff room and eat nothing but candy and all our teeth would fall out."

Delap appreciates she is now one of the most envied school girls in the country but admits she never did get her mutiny.

"He said maybe a mutiny might not be a good idea today because there were a lot of police outside."

The school girl summed up her day as "amazing and indescribable".

She says she had thought of not washing her hand after hugging Depp but she's now changed her mind: "I probably will wash it, but it's still going to be there forever."