Foreign websites should be stopped from selling anabolic steroids to customers based in the UK, the government's drug advisors have said.

The Advisory Council on the Misuse of Drugs (ACMD) said it is increasingly concerned about the number of young men using the muscle building drug.

"At the moment it is much too easily available," said Professor Les Iversen, who chairs the council.

"We are recommending there should be a restriction on importation."

"The material available online is often contaminated and could be dangerous," he added.

The latest figures from the British Crime Survey (BCS), published by the Home Office, estimate 50,000 people in the UK are using steroids to train harder and quickly build muscle.

But researchers claim the real number could be far higher because many people will not openly admit to using the substance, even in an anonymous survey like the BCS. 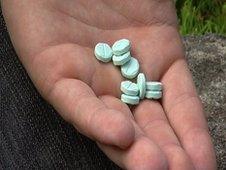 The drug, which can be injected or taken in pill form, mimics the effects of the natural male hormone testosterone.

Research suggests use can lead to side effects from acne to liver damage as well as eruptions of anger or "roid rage" as it is known.

For many years steroids were linked exclusively with sports like athletics or competitive bodybuilding.

But a report published by the ACMD suggests the drug is increasingly being used by teenagers and men in their early twenties as a way to build muscle quickly.

Professor Iversen said: "It is becoming a big phenomenon in the UK. There is no question that the number [using the drug] for sporting reasons is now a minority.

"The real growth has come in young users who want to improve their body image."

Steroids sit in a legal grey area between a medicine and a banned recreational drug.

As a class C substance they are illegal to sell or deal unless they are prescribed by a doctor for medical reasons.

We think [a ban on importation] would have a considerable dampening effect on demand. It may be difficult to enforce but it would act as a simple deterrent
Professor Les Iversen
The Advisory Council on the Misuse of Drugs

But it is not against the law to buy the drug as long as it is for personal use.

Professor Iversen said there are no plans to recommend a change in its legal status as doing so would risk criminalising thousands of young people unnecessarily.

Instead the ACMD is calling for a ban on the sale of steroids from the hundreds of overseas websites which deliberately target British users and ship packets of drugs directly to the UK.

The Council is concerned that drugs bought over the internet can often be contaminated, out of date or delivered with the wrong dosage instructions.

An import ban would mean packets could be stopped at customs and prevented from entering the country.

Professor Iversen said: "If you search online you will see endless offers. The ACMD is the lone voice against this tide of promotion on the internet." 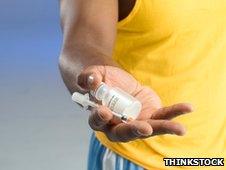 Image caption Anabolic steroids can be taken as pills, injected or used as a skin patch

"We think [a ban on importation] would have a considerable dampening effect on demand. It may be difficult to enforce but it would act as a simple deterrent."

The ACMD is also recommending an increase in the support available for users trying to stop using the drug.

It is not thought that anabolic steroids are physically addictive in the same way as harder recreational drugs like cocaine or heroin.

But long-term use may lead to a psychological form of dependency that makes it extremely difficult to quit.

"In some parts of the UK there are proper centres offering support and treatment for steroid users but they are few and far between," said Professor Iversen.