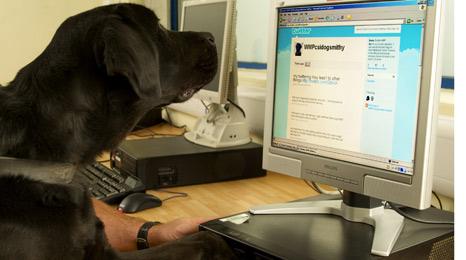 West Midlands Police have been criticised for setting up a Twitter page for their sniffer dog.

The two-year-old Labrador, called Smithy, regularly posts updates on the social networking site about his life.

A recent tweet read: "Just got back from my late walk, bedded down in my kennel now for the night, day off tomorrow."

So far the internet-savvy CSI dog has secured only 155 followers.

As well as writing updates on his daily life, Smithy also appeals for help with ongoing police investigations.

In August he posted a link to CCTV footage of a missing 24-year-old woman called Sylwia 'Magda' Ciapcinska with the comment: "Can you help us find Sylwia?" 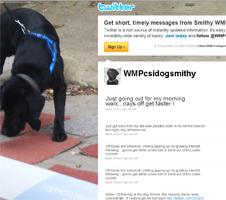 He also updates followers on crime-fighting activities with comments like: "Out on patrol its nights. . . Saturday night and already we have seen a few who will feel ruff in the morning."

Smithy's trainer PC Terry Arnett said: "It was just something he wanted to do.

"He felt he and his team weren't getting the praise they deserved and the next thing I knew he was tweeting.

"We've had to have the keyboard adapted so he can type, but apart from that it's his way of letting people know the important work he and his pals do."

The TaxPayers' Alliance, a group campaigning for lower taxes and an end to wasteful public spending, has criticised the social networking venture.

They described it as a diversion from real police work.

Smithy is one of two police dogs trained to search for blood and human remains.

PC Terry Arnett said: "The 'tweeting dog' was intended as a light hearted story so it was deeply disappointing that it attracted such criticism.

"The aim was to draw young people to the West Midlands Police website to learn about crime detection in a fun and educational way, using Twitter in the officer's own time."