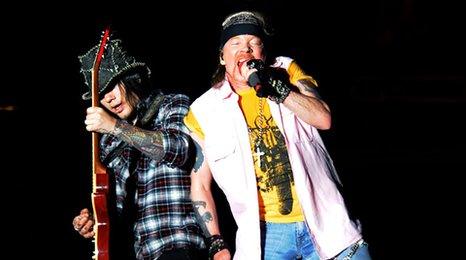 Guns N' Roses have walked off stage at a gig in Dublin after being booed and having plastic bottles thrown at them by the crowd.

The singer was forced to stop the O2 set 20 minutes in during Welcome To The Jungle and said: "Here's the deal: One more bottle and we go home."

Last weekend the band caused controversy after trying to play over their curfew at the Reading and Leeds festival.

Following the walk off a member of staff at the venue addressed the audience and said: "We're trying hard to get Axl to come back on stage. I will ask you to refrain from throwing items. I promise you a great show, but you need to be calm."

After a break of 60 minutes the band did return to to the stage at 2330 to play a set which continued until 1am to the fans who remained in the venue.

A joint statement issued by promoters MCD and the O2 has apologised to fans for the late running but added: "No artist should be subjected to missiles and unknown substances being thrown at them."

After attempting to play through their extended curfews at Reading and Leeds Axl Rose declared "war" on the promoters as he left the stage on Sunday (29 August).

Festival organiser Melvin Benn replied by saying he would book the band again but "wasn't sure they'd play for me".