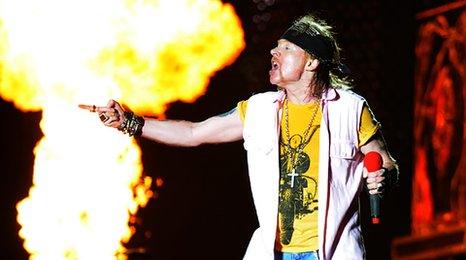 Guns N' Roses had their Reading Festival headlining slot cut short after turning up on stage an hour late.

The US band, led by singer Axl Rose, started their performance at 10.30pm on Friday night (27 August).

Festival organisers say they were given an extra half hour to play.

A statement read: "Guns N' Roses wanted to 'extend' the new agreed curfew but were prevented from doing so in order to comply with the entertainment licence issued by Reading Council."

Following the delay, the American rock band were booed when they took to the stage at the Berkshire site.

Despite that they played a set including hits like Sweet Child o' Mine, Welcome To The Jungle and November Rain plus tracks from their latest album Chinese Democracy. 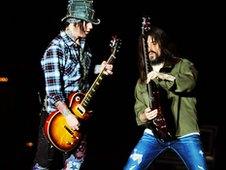 They walked offstage after playing Nightrain from their 1987 debut album, Appetite for Destruction.

When they tried to play Paradise City as an encore the speakers were cut by festival director Melvin Benn.

Video footage shot by fans shows the band playing the song with no guitars and the crowd shouting along despite the lack of sound with Axl Rose singing through a megaphone.

87,000 people are at the festival for the three-day event - most wearing wellies after torrential rain caused muddy conditions.

The rain held off for most of the day but started to fall again at the end of the Guns N'Roses set.

That's after the festival had to deny rumours that Guns N' Roses had cancelled their performance after someone hacked into the lead singer's account and said the gigs were off.