Sky Ferreira on being friends with Michael Jackson - BBC Newsbeat

Sky Ferreira on being friends with Michael Jackson 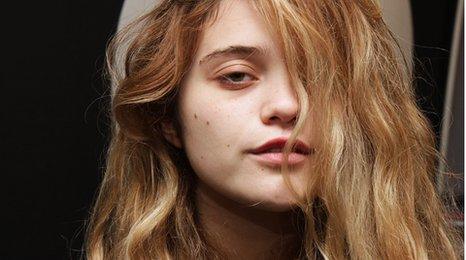 Eighteen-year-old singer Sky Ferreira may have just got her big break, but she's no stranger to pop royalty and even holidayed with Michael Jackson when she was growing up.

The LA-born singer says her grandmother worked with the star for years and became close to him, so he was always around when she was young.

Speaking to Newsbeat, she said: "We just became friends with him. When I was born I was raised around him, I always saw him. I had holidays with him and stuff like that.

The teenager first made her debut on music site MySpace where her sudden popularity bagged her a first record deal.

Things haven't always run smoothly though. She admits that she did fall out with the label at one point when she felt they were making her sing music genres she wasn't happy with.

However she's now realised she can be commercially successful and still be happy.

Ferreira said: "I love doing top 40 type music. I love doing both. I can do both now. Before I was so caught up in thinking I could only do one type of thing.

"A lot of people don't have an opportunity to do huge radio songs. I realised I was taking advantage of that when I had all these huge writers and producers just throwing these hits at me.

"I actually want a big song. As long as the song's good - that's all that matters."

The record was recorded in Stockholm and London and debut single One is out in the UK on 23 August.

The singer describes the track as being "extremely pop" and says she'll save other side projects she's working on so she's not limited to one thing.

"But they aren't going to deal with that when they're putting so much money into it. I was like, 'Well none of this would be happening now if I wasn't signed'.

"Not to this extent at least, so you have to give them what they want sometimes. At first it was really hard for me. I just realised recently that it's just going to open more doors for me."

So with Michael Jackson counted amongst her childhood friends, is he a big influence on her music?

She replies: "Yeah. a lot of my music is a throwback to Prince and Vanity 6. I guess the 80s and 90s pop music - that's my favourite era of pop."

Sky Ferreira's debut single One is out in the UK on 23 August.