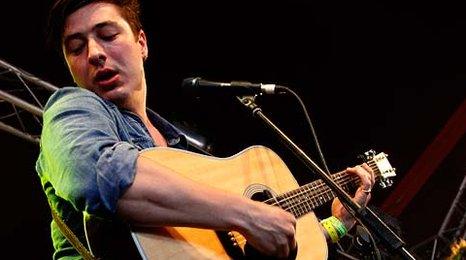 Mumford and Sons have begun working on the follow-up to their 2009 debut Sigh No More, describing the sound as "more urgent".

"We're going to evolve as we did whilst making this album. It's hard to say as we've got a lot of touring ahead of us and we write a lot on the road."

The Oxford foursome debuted a handful of new songs as they played a set on the John Peel stage at last weekend's Glastonbury.

The band have just returned from a six week US tour, before playing a number of UK festivals this summer including T In The Park, Latitude and Reading and Leeds.

"We have a lot more to experience before we tie [new] songs down," said Lovett.

"But there's no drought yet," he laughed. "If nothing we'll release half an album.

"It's kind of tough - as amazing as the life [on the road] is, you spend a lot of time away from home as well.

"A lot of the first album we were at home. This time we've been away from our loved ones and our families - I think there's a bit of rock and roll to express through that."