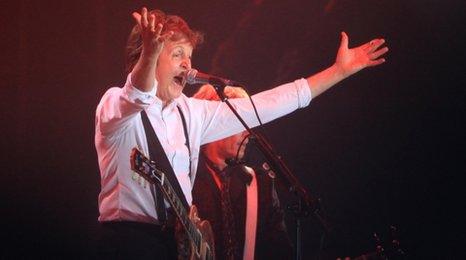 Sir Paul McCartney has revealed that he's been commissioned to write the music for a ballet.

Details still need to be fleshed out but he's already started work on the score and says he's "enthusiastic" about it.

"I'm interested in doing things I haven't done before," he said.

"That offer came up and I love writing music, the two went together and I said, 'Yeah,' so I just accept things before I even know what I'm doing."

There's no set deadline yet and when asked what the ballet would be about, McCartney admitted it was early days.

"I don't really know that much about it yet," he admitted. "I'm just writing music for it, but it's a switch!"

The former Beatle has written classical music before.

Actually I have been trying to do Millennium Stadium for a little while. I love Wales, we used to hitch-hike there when we were kids. It's a great place
Sir Paul McCartney
Singer on playing in Cardiff

It involved a ceremony at the White House where Sir Paul performed for President Obama and his family, cheekily playing the Beatles' classic Michelle, for Michelle Obama.

It went down well though, as Sir Paul recalled: "I start singing Michelle, and he (Barack Obama) starts singing it to her."

"It's great, I couldn't believe it, he's singing the French bits, he's leaning over to his kids and going, 'This is about mum!'"

McCartney says he also got the Jonas Brothers invited to liven up the ceremony for Obama's young daughters Sasha and Malia.

After closing the Isle of Wight Festival last Sunday (13 June), this weekend marks the first time in 20 years that Sir Paul will play in Scotland, with a gig at Glasgow's Hampden Park.

He admits he's surprised it's been that long but says it wasn't "by design". 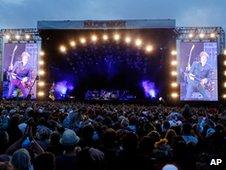 Then on 26 June he performs at Cardiff's Millennium Stadium, ending a 35-year gap from playing in Wales

"It sounds bad, doesn't it?" McCartney admitted. "Truth is I don't think of it like that.

"I don't look at the world like that, 'How long is it since I was there?'

"It's actually just a case of your promoter saying, 'Would you like to play Cardiff? We can get the hall on that night,' and I go, 'Oh, I'd love to!'"

Sir Paul is pleased with the venue though.

"Actually I have been trying to do Millennium Stadium for a little while," he admitted. "I love Wales, we used to hitch-hike there when we were kids. It's a great place."