David Cameron's holding his first cabinet meeting (13 May). The government's already made its first policy announcements.

They include saying "no" to more runways at Heathrow, Gatwick and Stansted and a cap on migrants coming to Britain from outside the EU. Home Secretary Theresa May says they haven't decided a number for that yet.

The UK has its first Conservative leader for 13 years and the first coalition government in 70 years.

He said: "I came into politics because I love this country and I think its best days still lie ahead and I care deeply about public service.

"Our country has a hung parliament where no party has an overall majority and we have some deep and pressing problems; a huge deficit, deep social problems and a political system in need of reform."

In pictures: Cameron's rise to PM

In his leaving speech he paid tribute to his staff and family.

He said: "I thank my sons John and Fraser for the love and joy they bring to our lives and as I leave the second most important job I could ever hold, I cherish even more the first - as a husband and father."

Harriet Harman will stand in as leader until the Labour party chooses a new one.

The Lib Dems approved the deal late on Tuesday night (11 May). There will be five from the party in the cabinet out of a total of 22 jobs including Nick Clegg, who's been made deputy Prime Minister. 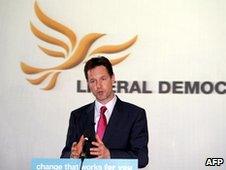 He says working together won't always be easy.

He said: "I wouldn't have entered into this agreement unless I was genuinely convinced that it offers a unique opportunity to deliver the kind of changes that you and I believe in.

"Diverse, plural, where politicians of different persuasions come together, overcome their differences in order to deliver the good government for the sake of the whole country.

William Hague is the new foreign secretary, George Osbourne is chancellor and his number two will be the Lib Dem Vince Cable. He will deal with the banks as business secretary.

The changeover was ruthlessly quick with Gordon Brown leaving, going to see the Queen, then within 90 minutes David Cameron was in Downing Street.

The new government is very different.

The Tories and Lib Dems picked each other apart during the campaign. Now they are on the same team and hope it will last for years.

Each side had to ditch some things to get the deal done and it's an extensive agreement.

They also get the promise of a referendum, a national vote, on changing how we choose our MPs.

The Conservative plans to start cutting and paying back the vast deficit we owe will start now, as they always insisted.