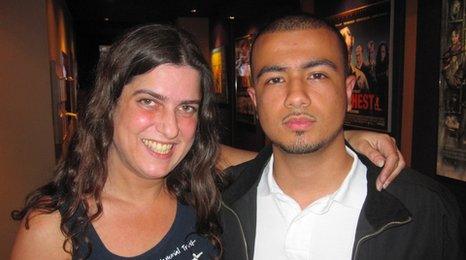 The sister of a woman who died in the 7/7 London suicide bombings says she wouldn't recommend other victims of terrorism watch a new British comedy about four wannabe suicide bombers - but understands what the director was trying to do.

Four Lions follows a group of men from Sheffield who plot to kill thousands of people at the London Marathon.

The four aren't the cleverest bunch but between them manage to convince each other that bombing and causing havoc is the best way forward, so that they can become martyrs.

It's a comedy created by satirist Chris Morris, who was behind the controversial Channel 4 show Brass Eye.

Some of the families of the 7/7 victims are demanding cinemas refuse to show it. But are they right?

Esther Hyman lost her sister Miriam in the attacks on 7 July 2005. Newsbeat got her together with 19-year-old Muslim youth worker Ali Al-Musawy from Brent in London to watch the film and review it. 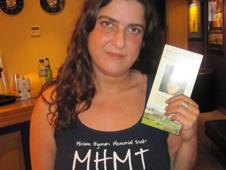 "I get what the director's trying to do and I understand it. For me personally, the bottom line is the same as with the events of 7/7 and with life in general. It doesn't really matter how I feel about the film.

"The outcome is the same. It's there. It's been released and I think the less time that I spend fretting about it, the more time I can spend on more constructive things like the trust we have for my sister.

"It's difficult to explain. I find the same when I'm watching any comedy show on TV and they make a jokey reference to violent extremism, I have the same reaction.

"At the same time I understand that, in our democracy and with freedom of speech, people are entitled to make fun of any subject. There's nothing that's sacred.

"I feel just because for me it's personally a sensitive subject that it's not something that shouldn't be tackled. It should be tackled and maybe this will provide a platform for some honest and upfront discussion.

"It doesn't matter whether or not I'm offended. People are grown ups. They can make their own choice. If they think that it's going to be something that they find offensive, they don't have to watch it.

"For me personally, I can't say whether I enjoyed it or didn't enjoy it. There were aspects of both in there for me." 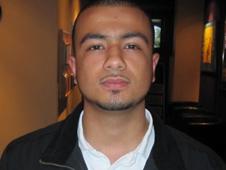 "It's not directed at Islam but I think I got the moral behind the film.

"Just because he looks like a Muslim, it's not necessarily him that's doing the bombings.

"I didn't find it offensive. It was emotional because you can see how a vulnerable person becomes radicalised and does something they don't want to do.

"What the film shows is how terrorists work from the inside and how it's seen in the outside world.

"If Muslims get offended by terrorists having the mickey taken out of them, it just means they're attached to and they believe in that terrorism, so I don't think any Muslim should be offended by that.

"I'd advise people if they want to go and see it, they have to go in with a neutral mind."

Four Lions is released in UK cinemas on 7 May.