Image caption The Futureheads release their fourth album in May

One topic of conversation dominated every interview The Futureheads did last time they released an album.

The Sunderland-based foursome were dropped by their label after second album News And Tributes. They gathered themselves and released third effort This Is Not The World under their own steam.

It was a success, giving birth to a top 20 single and charting well itself, and a victory for their enforced move into self-employment.

"I think on the last record the music itself was overshadowed by the back story," admits guitarist Ross Millard.

"It was almost deemed a comeback and maybe surprised some people that we made a record and released it in that fashion.

"But now a lot of people are doing that - the time is right for that kind of independent thinking." 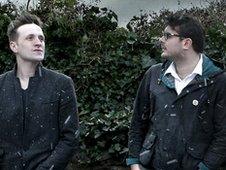 Indeed, with their last outing the angular-rockers not only proved themselves masters of the pop hook, but also as shrewd businessmen.

Two years on they continue to be their own CEO, A&R guy, producer and bank manager.

"It doesn't cost the earth to make a record anymore," says Millard, delving into the economics.

"You've got people with laptops in their bedroom making perfectly great-sounding records these days. The costs are down."

The Futureheads say they have proven it isn't necessarily the end of the road when a band has to go it alone.

"We proved it with the third album and now we can prove that we are a band that can carry on," says lead singer Barry Hyde.

In effect, new album The Chaos, is a clean slate. They've exorcised their anger and disappointment. It's an album that deals with moving on.

Because of the back story of the band we feel perfectly entitled to have this righteously positive album
Ross Millard, The Futureheads

"Because of the back story of the band we feel perfectly entitled to have this righteously positive album," says Millard.

"There are only two main enemies of positivity," interjects Hyde, explaining the album contemplates the current state of UK culture. "The big one is apathy. The other one is ignorance and closed-mindedness.

"Conformity and apathy - the combination is deadly."

Typically articulate, the band haven't forgotten how to write a stonking pop song in between balancing the accounts.

Current single Heartbeat Song is the jewel in the crown - a track conceived in under half an hour at 11 o'clock at night when producer Youth (The Verve and Embrace) told them to write a new song from nothing in 30 minutes.

"That's the great thing about Youth," laughs Hyde, scratching his head. "He takes you out of your own personality through fear. He raises you up, he challenges you.

"You basically find yourself walking home from a session with Youth thinking 'What's just happened there?'

"Suddenly you have a new song - it's like suddenly having a new car."