Controversial DVD censoring system to be launched in UK 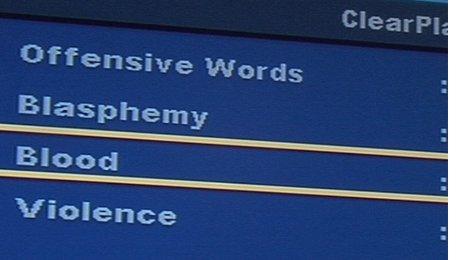 A controversial new DVD system that can censor films is to be released in the UK later this year.

But the system has been criticised in America, with the Directors Guild of America taking the company to court claiming violation of copyright laws.

A judge decided that wasn't the case because no fixed copy of the altered version of the motion picture was created.

Skip Riddle from the company has defended the system saying the original movie is never actually edited.

"We're not in the censoring business. We are not altering their film at all," he said. "All we are doing is allowing viewers to balance the artistic integrity and rights of the author to the rights of the individual viewer.

"We are trying to make some tools available for individual viewers.

"Today they can only choose on or off. With ClearPlay they can make vastly more choices."

The system requires a compatible DVD player and a monthly subscription costing $7.99 (£5).

This 'meta-data' tells the player when to jump past a scene or cut the volume.

The company admits film makers could, in theory, object to having sections of their work missed out.

ClearPlay says it hopes to expand beyond DVD into BluRay and TV channels delivered over the internet (IPTV).

The British Video Association in the UK says it has no problems with the system.

In a statement its director general Lavinia Carey said: "ClearPlay has an innovative system for enabling parents to shield their children from what they consider to be inappropriate content in the home.

"This may be on titles classified for their age but which might feature language or scenes that they'd rather their children didn't see.

"It may also allow them to watch age restricted video with younger children whose content is generally suitable to view but again there may be moments of stronger content."