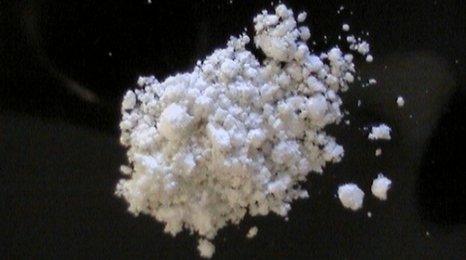 There are calls for emergency laws to make the legal high mephedrone a Class A drug.

Officials in Guernsey say they're so worried about it they might act alone and ban it before the UK.

Mephedrone, also called plant food or meow, has a similar effect to speed or cocaine.

At the moment mephedrone is legal in the UK but government drug advisors are looking into whether it can cause mental illnesses like psychosis or even weight loss.

Doctor Les King used to be head of the drugs intelligence unit at the forensic science service.

He said: "These substances are so new that they've caught everybody out.

"I think all we can say is that these things are probably as harmful as amphetamine and ecstasy."

Mephedrone is popular with clubbers and students because it's cheap and easily available online.

It's also often sold in specialist shops as plant food.

Action's already being taken on mephedrone in Guernsey where authorities have banned it from being imported and are considering making it a class A drug.

Andrea Nightingale, Guernsey's drug and alcohol co-ordinator, said: "If the effects are as great as we think they are, then we have to do something more than just banning it at importation.

"If it's an ecstasy lookalike, or a cocaine lookalike, it will become a class A drug."

Mephedrone's already been banned in Sweden, Denmark and Israel.

Danni, 18, used to spend £500 a week on mephedrone and is now in prison in Guernsey for stealing to fund her habit.

"I couldn't get myself out of bed," she admitted. "I was very skinny. I was having to detox off of all sorts of different drugs. I was on death's door really."

Twenty-five-year-old Danny from Essex also used to be addicted to the substance.

He said: "My heart was beating really fast. I was sweating, like a really thick sweat. My jaw was going. I was basically chewing my mouth.

"The worst thing about mephedrone is once you start doing it you want to do more.

"You want to keep redosing all the time and before you know it, you've done loads."

What is legal high mephedrone and what are the long term dangers?