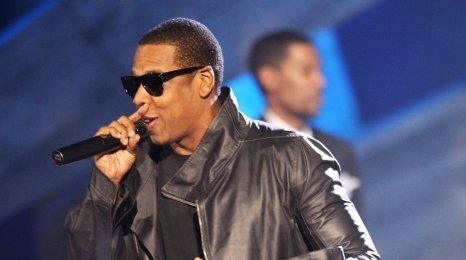 Newly-crowned best international male at the Brits, Jay-Z's advice to the British music industry is less is more.

The rap superstar set up his own Roc Nation music business, a joint venture with gig promoters Live Nation to manage artists, which looks after their tours as well as putting out CDs and downloads.

So far there are only a handful of artists on his watch, including British acts the Ting Tings and Sugababes.

Jay Z said: "Records are not selling as many as they were before and you've still got to go out and pay the Bentley bill."

Tickets for all the shows go on sale on Friday 19 February.

He admits touring is where a lot of the cash lies and Jay-Z gets a say in his merchandising deals as well, thanks to his own 360 deal with Roc Nation that dips into all aspects of his work.

When quizzed on the plight of the UK's music industry, which has struggled to cope with illegal downloading, Jay-Z said "people have to be smarter about how they A and R, and what they put out".

He added: "Record companies need to catch up to that, someone needs to send them the memo."

He makes his point by reminiscing about his time in charge at US label Def Jam, a decade ago.

"I remember the first year I was at Def Jam we put out 56 artists. There's not 56 great artists in the world, and this is one company.

"One company operating for like, 80 artists in a year. That's just too many."

So does Jay-Z plan to add Cheryl Cole to his Roc Nation family?

"Cheryl Cole, I saw her (at the Brits) last night," he admitted.

"She's had a big production. I don't know, I have no idea but we'll figure it out soon though."

He also wouldn't say if Chipmunk or Tinchy Stryder were acts he was considering.

But Jay-Z does credit Amy Winehouse with reinvigorating the British music scene.

"There's a strong push coming out of London right now which is great," he reckoned. 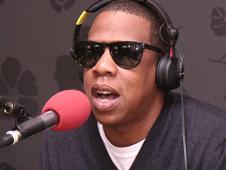 "It's been coming ever since I guess Amy (Winehouse). I mean always, but I think Amy, this resurgence was ushered in by Amy, that's how I see it."

Tears Dry On Their Own is Jay-Z's favourite Amy Winehouse track and he finds her incredibly talented but says he's "just praying she doesn't turn into Lauryn Hill and we never get another album".

Chewing on chips to combat his Brits hangover, the rapper admitted the ceremony was a good opportunity to sign up touring buddies.

After cornering Lily Allen at the show, he's hoping she'll join him for the 4 July gig in London.

"That's the place where Kanye (West) brought me the tracks for Blueprint 3, so there's a little connection there," he said.