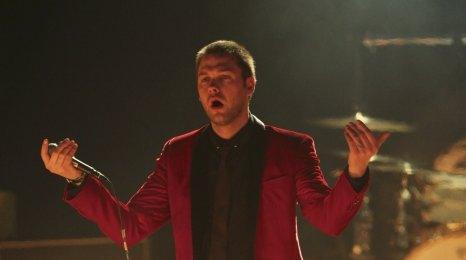 You may think that once Earls Court's caretaker has swept all the ticker-tape away, they've packed up Lily Allen's sparkling zeppelin and herded Florence's army of harpists back into the tour bus that might be it for Brit Awards night.

Not the case. Once the curtain goes down a fleet of blank windowed people carriers whisk the great and good of the music world to the hot night spots of London.

Newsbeat spent a long night going with them.

Taking into account the height of Lady Gaga's heels you wouldn't blame some of the girls heading to the official Brits after show as it is literally hosted a short stroll behind the stage. 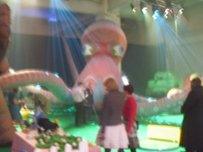 Whilst the celeb-count is low the entertainment is extravagant. A giant inflatable octopus, crazy golf, a dressing-up stall and, of all things, ukulele karaoke.

Weirdly, shortly after Robbie Williams has wrapped up the official ceremony, a bunch of pearly kings and queens are stood watching a cabaret act.

More of a theme park than a party then, and most people appear to have headed elsewhere.

2009's bash ended with members of U2, The Killers, Coldplay and Take That all on stage together.

Tonight's show at London's Shepherd's Bush Empire isn't rivalling that - we get La Roux dueting with Heaven 17 and The Mighty Boosh's Noel Fielding joining Kasabian - but it's still an all-star set up.

Tom Meighan arrives will a sore backside after he took a tumble running to pick up Kasabian's award for best British group earlier in the evening.

"I feel human for doing that," he laughs afterwards. "It's like Bambi on ice, it's like a Disney film."

The gig itself is a celebratory lap for one of Britain's biggest rock bands.

Gemma Arterton and Sheridan Smith both dancing to Kasabian's Fire.

Meanwhile back in central London rumour is there are 800 invites circulating for this 350 capacity venue. 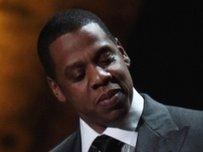 The toilets have more mirrors than Alice In Wonderland, a DJ playing 90s rave and the finger food is exceptional.

All the talk is of whether Jay-Z is going to show - and he does, surrounded by a ring of security but greets fans in a corner.

Others who've turned out? Marina and the Diamonds, sporting a glittering all in one suit, is tucked in a corner eating mini burgers. Foals are here, Friendly Fires' Ed MacFarlane, Mike Bailey (Sid from Skins) and Tom Clarke from the Enemy all making the most of the free bar.

Jay-Z swaying to his own song Empire State Of Mind.

The dozens of paparazzi bun-fighting outside tells you everything you need to know about the Universal party.

It's an oriental themed bash, the room is decorated with bird cages, lanterns and there's a kitchen set up in the middle of it all, churning out duck pancakes.

There's a lot to celebrate too. Florence Welch totters down the carpeted staircase, Lee from Blue, Calum Best, Keith Lemon, Last Shadow Puppet Miles Kane and Geri Halliwell are all milling about in the decadent surroundings.

Louis Walsh, with now familiar bow tie, is the unlikely late entrant to the do, no doubt drinking to the success of JLS.

Nervous recipient of the critcs' choice award earlier in the evening, Ellie Goulding summed up the feeling felt by most people by tweeting: "Lady Gaga held my hand and we talked and I think I died."

Florence and the Machine lovingly clutching her Brit award for best British album.