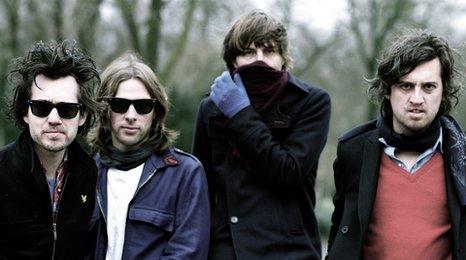 French band Phoenix haven't so much as risen from the ashes as taken a slow, steady hike to stardom since they got together at the end of the 90s.

"It was always a very selfish thing," says lead singer Thomas Mars of their slothful ascent. "It comes from the fact we grew up in a city [Parisian suburb Versailles] where we couldn't really relate to anyone there.

"We always did music not to get girls, not to get the attention but really as a selfish thing. It was just four kids on a Friday night trying to do something together. We've tried to keep it that way.

"I think we can do this even if no one is coming to the shows. For us that's not a problem."

But people have been coming to their shows; more and more every year during their 10-year, four-album career.

Now, their patience has been rewarded (with a Grammy award for best alternative album for last year's Wolfgang Amadeus' Phoenix) - an experience they found both alien and exciting. 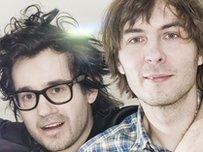 Image caption Phoenix have contributed towards Sofia Coppola's next film

"It's closer to a Cirque du Soleil trip than anything else. It's very unique," says Mars of the evening where Lady Gaga performed covered in dirt with Elton John on a double-sided piano.

"When you win, what is crazy is you have people who you admire come and almost welcome you to the club. It was very weird. Neil Young came and said 'welcome.'"

In truth though, through hundreds of gigs and countless knock backs, it has been a long time coming.

"People around us in France make us feel like it's a really big deal," says Mars returning to their prize. "But then it's just going to be a trophy on the shelf and there's something sad about this.

"It's going to be like the broken record in Johnny Cash's music video that's lying there by the wall.

"My girlfriend has many awards so I need one for myself on the shelf, so I think I'm just going to put it next to hers."

People around us in France make us feel like it's a really big deal. But then it's just going to be a trophy on the shelf and there's something sad about this
Thomas Mars, Phoenix

The girlfriend he refers to is film director Sofia Coppola, daughter of Francis Ford Coppola and brains behind films like Lost In Translation and The Virgin Suicides.

Together they're a collaborative creative force and are expecting their second child.

The band has just finished recording the soundtrack to her new film Somewhere, due out later this year.

It's their first forage into penning whole movie soundtracks.

"It's very minimal," says Mars. "It's almost like sound design. It wasn't like writing songs, it was more about trying to make a sound that fits with a Ferrari and the city of Los Angeles's theme. It was more of an engineer work than a composer."

Fans will have to wait to hear the fruits of that, but not if they want to see their heroes - in the UK at least. They return to play live again in March.

"It's one of the crowds who really understands us the most because we grew up watching English bands in a very intense and short way," the singer says.

"A lot of people don't understand that especially in France. If you play a short set they'll get upset and if you don't play the hits."