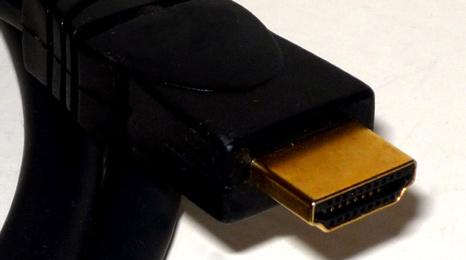 That might seem like powerful argument for road safety, but it's the kind of line being trotted out in high street electrical stores to sell HDMI cables.

These short, unexciting-looking wires are used to connect devices such as Blu-ray players and games consoles to modern, flat screen televisions.

HDMI cables rarely come included with new gadgets and while they can be bought for as little as 95p, some retailers stock models costing up to £110.

Kerry Lennox contacted Newsbeat. She said: "I recently bought a home cinema system and was informed by the shop assistant that I would need to buy a £50 HDMI cable. I bought one for £10 from a well known supermarket chain."

Marcus Hodges wrote: "I've got a really expensive one and a cheap one for £12. To be honest, they're exactly the same!"

"Blu Ray players and the TVs they hook up to are completely digital, so you are talking about ones and zeros," said James.

"The cable itself isn't contributing to the quality of that picture at all. It is just moving it from one place to the other. It's the electronics at both ends that do the hard work."

Dr Eric Chowanietz, Principle Lecturer in Media Technology at De Montfort University, believes there is little to support the claims made for pricier models.

As you connect more and more items together, say an HD box and games console, or multi channel amplifier, you will need better and better quality cables to maintain the quality of the signal
Chris Jenkins, tech labs manager

"The document quality depends on the printer and it is much the same with a digital system."

Newsbeat went on a mystery shop with 20-year-old student Ed Trencher. In each store he asked which cable he should buy for connecting an Xbox 360 to a HD television.

John Lewis: "They said their cheapest cable was £19.99 and I shouldn't spend any more because they all do the same thing."

Micro Anvika: "The guy said HDMI is HDMI and the cables shouldn't really differ. The cheapest one, he tried to sell me, was £29.99. The most expensive one they had was £95 and he said there wasn't really much difference between them."

PC World: "They tried to sell me a £39.99 HDMI cable which was, apparently, clearer picture quality."

Currys Digital: "They said I should buy the £69.99 HDMI cable because it provided a much better picture quality over the cheaper version, but for some reason [the assistant] decided to knock £20 off."

A statement from DSGi, which owns the two chains said: "We always aim to help our customers find the right product for their choice of hardware by clearly explaining the differences between the cables and our staff receive training on these products.

"The choice of HDMI cable is mainly determined by the level of signal purity that the consumer is looking for in the connection between playback device and television."

The company said that some cables were more expensive than others because the materials used in them, such as copper wiring, were of a higher quality.

One expert who supports that claim is Chris Jenkins, tech labs manager for Future Publishing group, behind Home Cinema Choice.

He argues that more expensive cables do make a difference, especially in more complex home cinema setups and over cable runs of longer than one metre.

"As you connect more and more items together, say an HD box and games console, or multi channel amplifier, you will need better and better quality cables to maintain the quality of the signal.

Chris' advice is to budget around 10% of a system's price for HDMI cables.