'Dog rolling' is on the increase - BBC Newsbeat

'Dog rolling' is on the increase 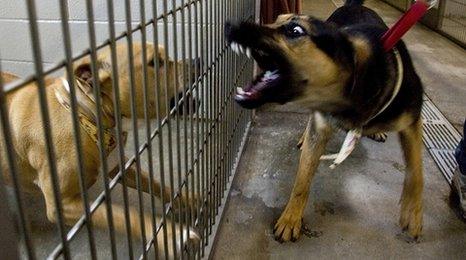 The RSPCA has told Newsbeat it's increasingly having to investigate dog fights set up to settle arguments between groups of lads. It's called "dog rolling".

It usually happens late at night in a random park. Dozens get together with their dogs to have a fight.

Have Your Say: Have you seen "dog rolling" fights?

Eighteen-year-old Anton and his mates do it a lot.

He told Newsbeat: "When I meet up with my friends, we've got 10 dogs and we love watching them fight.

When asked why he does it, he says: "Because I have the toughest dog and need to prove it."

Usually dog fights are well organised and held in private with up to thousands of pounds of bets being made on them.

'Hard to keep track of'

But the RSPCA are worried because "dog rolling" is so informal and very public.

They say two in three of their dog fight investigations are to do with dog rolling.

My dog keeps me safe. He saved my life once when a gang of lads came for me
Anton, 18, who loves watching his dog fight

Claire Robinson from the RSPCA said: "It's really hard to keep track of.

"As soon as we respond to any reports, those lads are long gone. It's over as quickly as it begins."

The other worry for the animal charity is that these fighting dogs aren't from the breeds banned under the Dangerous Dogs Act brought in in 1991: Japanese Tosa, American Pitbull, Filo Brasilero and Dogos Agentinos.

Their owners get round the rules by cross-breeding.

The RSPCA is lobbying the government to bring in new laws.

Claire said: "We'd like to see compulsory microchipping of all dogs.

"It's a really useful way of owners getting their dogs back if it gets lost but it helps us trace a dog if it's been used in a crime."

She also wants landlords to bring in tougher tenancy agreements on estates where dog rolling is common.

They would restrict owners and prevent them from breeding illegal dogs.

She added: "These owners are irresponsible... They are training their dogs to be aggressive by getting them to fight." 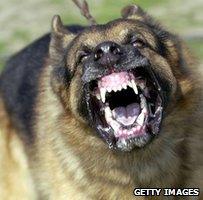 Anton says he's changed his dog's behaviour: "I bought him from a friend, he was alright, but then I started giving him weed and getting him paranoid."

He admits it's irresponsible but argues it's ultimately about his protection.

He said: "My dog keeps me safe. He saved my life once when a gang of lads came for me."

His mate admits that "people use their dogs like weapons, it's the same as knives".

But for Dave Grant who works as a vet at Harmsworth animal hospital, enough is enough.

He said: "This is a small vets and we're getting up to three dogs a day here that have been in fights. They've been shot at, beaten up, had their legs broken. It's horrific."

He says more action needs to be taken against irresponsible dog owners.

He dismisses an option put forward by Deputy Mayor of London Kit Malthouse to "phase out certain dogs".

These dog fighters are young men, with no education, no jobs and almost exclusively in gangs
Vet Dave Grant

He said: "It's not the dogs at fault here, it's the owners.

"Instead of knee-jerk reactions, politicians need to handle this by working with police, animal charities and look at this council by council."

The Metropolitan Police has already launched a 'Status Dogs' Unit to tackle the problem in London.

In the last eight months it's seized 680 dangerous dogs and is working with eight councils in London to tackle dog fighting.

Dave Grant's in favour of the RSPCA's call to microchip dogs belonging to owners who've been involved in fights and to change tenancy agreements to stop indiscriminate breeding.

He said: "You won't see this problem going on in affluent areas.

"These dog fighters are young men, with no education, no jobs and almost exclusively in gangs. Once we address that issue, we can come up with ways of solving the problem."